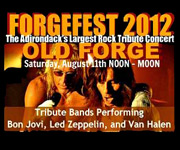 Gates open at 12 noon, with opening set by local favorite, Showtime. They are followed by Blades of Glory, from British Columbia, doing Jon Bon Jovi, then Kasmir, performing Led Zeppelin.

The concert ends with Completely Unchained, performing a tribute to Van Halen.

After the music ends, fireworks will light up the sky.

There are several train packages for the event, including the Rock n Roll Express from Utica, and an Adirondack Scenic Railroad special!

Want to win FREE tickets to this great event? Enter to win a four-pack of ForgeFest tickets ($120 value) every day to increase your chances of winning!