Anyone who has been can agree there is no place quite like the Adirondacks in summertime. Well, one local, Gregg Simmons, recently put his feelings into verse and song, mentioning all the little things he loves about Summertime in the Adirondacks. 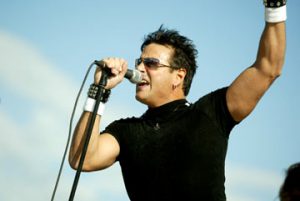 While Simmons isn’t sure what will become of his new Adirondack country song, he hopes to get the word out and let others enjoy and relate to the experiences that have made his summers in the Adirondacks so enjoyable.

LISTEN TO THE SONG

Simmons took some time out for an interview with Adirondack.net to discuss his recent song and the story behind it as well as tell us a little about himself.

Where are you originally from, and where do you live now?

How often do you get up to the Adirondacks?

Every Summer since 1980, partying up a storm! Only sober nowadays lol

What inspired you to write “Summertime in the Adirondacks,” and how long has it been in the works?

This song was written on a freezing cold January day 2012. I was thinking of when I was having the most fun in my younger days. I think for everybody who knows about Lake George and the Adirondack region, Memorial Day weekend meant, head up north and go crazy! Fun crazy, not crazy crazy. I think alot of people can relate to the storyline . Its fun, upbeat and most of all, We own it, people from all over the Country know about this awesome part of the country.

Do you have a band?

Cryin’ Out Loud — This band is a gang. We are close friends and have a great time entertaining. I have to mention their names.

Who are your influencing bands or artists?

There are so many, I love all music. Aerosmith, especially Steven Tyler. His lyric writing is incredible, his voice is unique and his stage show was as good as or better than Jagger’s in my opinion. David Lee Roth (from the 80’s) he was a game show host of an entertainer, lots of fun to watch. Chicago, Earth Wind and Fire, Michael Jackson, Currently Keith Urban, Jason Aldean, Brantley Gilbert, Brad Paisley, Toby Keith, Dierks Bentley, Zac Brown. My favorite current R&B artist is Bruno Mars; that guy is bringing old soul back where it should be. Finally, Elvis and Johnny Cash of course.

What is your favorite part of being in the Adirondacks?

What’s your story / background as it relates to music?

I have been singing since the age of 6 or so, performing for my family on Sundays after dinner in front of one of them big ole stereos with the flip top about 6 feet long. I had to get my set done before 60 minutes and All In The Family. I would sing Jackson 5, Osmond Brothers and Partridge Family tunes.

My Parents always got myself and my two brothers involved in different things at a young age, especially sports and music. I played the French horn in 5th grade, and that wasn’t fun; it was the instrument they gave me. Now, getting on the school bus with a bulky French horn case and a leisure suit at 10 years old? you could imagine the teasing I received. It was actually good, though, because I learned to fight at an early age as well!

I switched to guitar, drums, both I played well, but the school band needed lower brass, so they gave me the trombone in Jr. High where I excelled. I played trombone all through high school and I currently still play in my band Cryin’ Out Loud, which I formed in 1999.

Singing was always the constant. Singing is what I enjoy most. My Mom would never, ever tell me to turn down the stereo in my teens and early 20’s. I am forever grateful to my parents. My Father in 1984, when I was performing in a Hair Metal band called M-16, told me I should sing Country music. He was a big Elvis fan; his favorite song was Love Me Tender. I laughed, because Country music in the 80’s to me wasn’t fun. Who’d a thunk in 2008 it would become my favorite music?

I heard Keith Urban’s You’ll Think Of Me, and I was hooked. I put together a band called Loose Cannon in the same year because I wanted to play WGNA’s Country Fest. When I set a goal, I reach it. We did that in 2010, and it was the greatest time; 20,000 people roaring is an awesome feeling, nothing like it in the world. We also played Country USA in Oshkosh Wisconsin the same year. We played 5 days straight on the same stage as Brad Paisley, Montgomery Gentry, Taylor Swift, Dierks Bentley, Jake Owen, Little Big Town, Gretchen Wilson and Lady Antebellum. We ate lunch with them, hung out backstage, it was a great accomplishment that we will never forget. Currently Cryin’ Out Loud has incorporated Country in its set, and I consider our band a crossover party band.

My solo CD is in the works right now, and the only reason I am writing songs and putting this record together is for my son Kyle. He is the joy of my life, and he was born the same day as my Father. Kyle was born 11/3/11 He is my first child and a true blessing. My mother passed on July 9th 2011 and my father on October 14th, 2011. It was truly a bittersweet year. I am 50 years old now, so when I retire from the local music scene, Kyle may not remember seeing me perform on stage, so I want him to have something forever from me and what my passion is, singing and entertaining. I will name the CD “Trrruck!” one of the first words he learned. He says it just like I spelled it. He makes me smile on my worst days. I also know my parents are proud and keeping their angel eyes on my son, myself and my siblings. I miss them dearly.

How many people have heard the song so far?

I am told there have been almost 2,000 plays on Facebook in one week.

What do you hope for the future of this song?

Just want it played once on a real radio station; that’s all I ask. Then I can take it off my bucket list. But like I said before, I did this 99.9% for my son. The .1% is the radio thing. 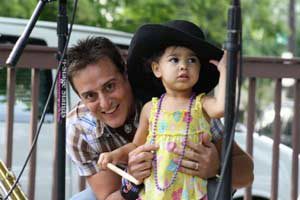 I have a niece named Mary. She is 6. I adore her and love her like she was my daughter. She has sang, played my trombone and danced on stage with my band since she was 1 year old. She is beautiful, funny, smart, talented, and an angel. God blessed us when he made Mary.

Have a listen to Summertime In The Adirondacks by Gregg Simmons and see if you can pick out some of your favorite places and activities. He specifically mentions the Minnie Ha Ha, Rachael Ray, The Sagamore, Painted Pony Rodeo, King Neptune’s, Americade, Elvis Fest, Six Flags Great Escape and more. Comment below to let him know what you think of the song!