Your Guide to the Adirondack Region
Enter Giveaways Advertise
Home  »  Attractions  »  INSIDE LOOK: The Making Of An Ice Palace

Every morning this week, in the frosty air of the Adirondacks, construction on an ice palace on the shores of Lake Flower makes progress in preparation for its annual debut at the opening ceremonies of the Saranac Lake Winter Carnival on January 31st.

Ever wondered what goes into making the famous Saranac Lake Ice Palace? This year, we take an inside look at how they pull the whole thing off every year. 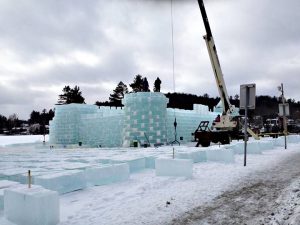 Where does the ice come from?
Ice for the palace comes right from adjacent Pontiac Bay on Lake Flower.

How is the ice cut into blocks?
A large, man-sized saw is pushed across the ice. After a chalk line marks the first straight cut, each cut afterwards is based off the previous straight cut.

Who puts it together?
A group of volunteers works hard to harvest the ice and build the palace each year.

What kind of equipment is used?
Cranes, excavators, loaders, tractors, saws, ice shavers, pikes and more go into the making of the structure.

How are the blocks mortared together?
A mix of snow and water is manually created to form a slush, which is spread between the bricks and later freezes, acting as a mortar to secure the ice bricks in place.

Who designs the Ice Palace?
In the past, architects have designed the palace, but the official website for the Saranac Lake Winter Carnival tells how it is done nowadays:

“In recent years, these extraordinary structures have been designed by residents who, though not professionally trained in architecture, nevertheless, with contracting and often engineering experience, step forward and exhibit extraordinary skills as evidenced by the artistry, complexity and sturdiness of the Palaces they create. Today a group of these volunteers meets in a local restaurant to sketch out the palace design (on a paper napkin) based on the Winter Carnival theme selected for that year. This sketch is then converted into a large blueprint which is kept on site during the building process.”

Who carves the sculptures?
Robin Johnson is the carnival’s master ice carver, and he never disappoints. This year, thanks to Robin, visitors can expect to be greeted by a unicorn out front, then inside find a towering dragon and a baby dragon overlooking two ice thrones. There will also be warriors, gargoyles, fairies and more. Oh yeah, and don’t forget the ice maze! The palace carvings are marvelous and fun for all ages.

How long does the Ice Palace take, start to finish?
Depending on the weather, it usually takes one to two weeks to complete. This year, work started on January 17.

How many ice blocks go into making the castle?
About 400 to 500 ice blocks are harvested daily, so thousands of ice blocks are used to build the structure, varying from year to year.

When was the first Ice Palace built?
1898 was the year of the very first Saranac Lake Ice Palace.

What happens to the Ice Palace after the Winter Carnival ends?
Not too long after the carnival ends, the Ice Palace is demolished and pushed back into Pontiac Bay to melt. They don’t leave it up to melt due to safety and stability reasons. The exact date of demolition depends on weather and ice palace stability conditions.

So there you have it, the making of the Ice Palace! This year, as you oooh and aaah at the lighted, spectacular ice palace at the Saranac Lake Winter Carnival, you’ll understand the hard work and careful planning that goes into making this beautiful work of art, taking it from paper napkin to something out of a fairytale! 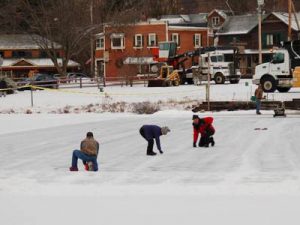