The Adirondack’s own Whiteface Mountain and local photographer Charlie Samuels are featured in the February issue of Road & Track magazine! 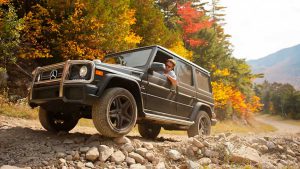 Whiteface Mountain gave local photographer Charlie Samuels access to drive two SUVs up their ski slopes up to 3,403 feet to get some great shots for Road & Track magazine!

The Road & Track SUV Challenge included a Mercedes-Benz AMG G63 and a Land Rover for three full, fall day shoots. Samuels scouted the spot in September after his friend, and Road & Track design director David Speranza, contacted him about the gig. Samuels then took the crew up for two days — one day just to get a feel for the mountain (and shoot some incredible photos that didn’t end up in the magazine) and the second day was the full day of shooting and research for the story about these high-end, off-road vehicles and how they handle off the asphalt.

“It was very photogenic,” says Samuels. “We could have spent three days shooting this.”

Within a week it will be off news stands, says Samuels, so grab a copy of Road & Track Magazine‘s Feb 2014 issue to read how this road test and these luxury drive trains handled Whiteface (and to see the accompanying photos, of course!).

“This is a great article for people who want to see what their SUV can really do,” says Samuels of getting to test these cars on boulders and various ski slope terrain instead of basic, off-road areas. “It was no problem actually. It was a walk in the park. I was hoping it would be more challenging.”

As for the damage to the cars? Just some bottoming out and some scraps.

You can see Samuel’s photo spread on page 68 of the February issue in the article titled “The $259,000 Lift Ticket.”