More than five years after it was initiated, a paddling lawsuit concerning the right of paddlers to navigate waterways that wind through private property will be heard in New York State’s highest court, the Court of Appeals. 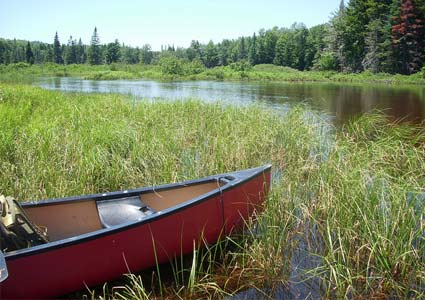 In 2009, Adirondack Explorer Editor Phil Brown paddled through Mud Pond, Mud Pond Outlet, and a portion of Shingle Shanty Brook, and documented his trip for the magazine. Those bodies of water cross private property owned by the Brandreth Park Association, which later sued Brown and Adirondack Explorer for trespassing. Brown could have avoided the private property on his journey between Salmon Lake and Lake Lila, but it would have required that he carry his canoe on land for three-quarters of a mile.

The case calls into question state navigation laws and whether or not the small, remote waterway Brown traversed is “navigable-in-fact,” and can therefore be used by the public. Because the waterway’s size and location are of no concern when determining “navigability-in-fact,” the State Supreme Court ruled in Brown’s favor in 2013 with the Third Department of the Appellate Division of State Supreme Court following suit in January 2015. In both cases, it was ruled that the waterway has the capability to be used for travel, and therefore is navigable-in-fact.

The January 2015 ruling, though, was a 3-2 split decision, which is why it will be heard again in the Court of Appeals. According to Adirondack Almanack, “The two dissenting justices said that the waterway’s remoteness – and the difficulty of undertaking such a journey – makes the stream of little practical use to the public.”

The landowners and their representatives are still hopeful that the Court of Appeals will rule in their favor. There is a possibility that if the case is not definitively resolved, it could go all the way to the United States Supreme Court. By this time next year, a new precedent could be set for paddling in the Adirondacks, or an old precedent could be solidified even further.