Zebra Mussels, Asian Clams, Watermilfoil. These are some of the most well-known aquatic invasive species that have been threatening Adirondack waters for many years, but they’re not alone. In total, the Adirondack Park Invasive Plant Program has identified 17 aquatic plant and animal species of concern that are either present in the region, or could be soon. This is not a good sign for the health and safety of our lakes, ponds, rivers, and streams, or the economic value of the Adirondack region. Fortunately, new efforts have recently been undertaken to slow the spread of existing invasives and prevent the entrance of new species into Adirondack waters. 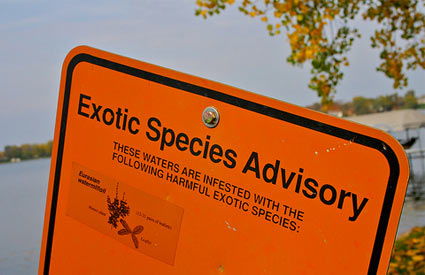 Photo Credit: Exotic Species Advisory via photopin (license)
To demonstrate just how significant of an impact invasive species can have, the Adirondack Park Invasive Plant Program commissioned a study last year. According to WAMC, that study found “if eight new invasive species spread throughout the Adirondacks, they could cost the region up to $900 million including losses in visitor spending, property values, and agriculture and forest production values.”

In an effort to avoid these disastrous outcomes, Lake George implemented new measures last year that required boats to get inspected for the presence of invasive species and cleared before they could be launched into the lake. It has been proven that these steps were highly successful in reducing the spread of invasives.

This year, similar procedures will be put in place throughout the Adirondacks. The Times Union reported that Governor Andrew Cuomo announced last week that an agreement between “the state, local governments, lake associations, and conservation groups” had been reached to make a greater effort at preventing the spread of invasives into the Adirondacks, which has fortunately not been significantly impacted by these species to this point. This Memorandum of Understanding was agreed upon by more than 50 parties. 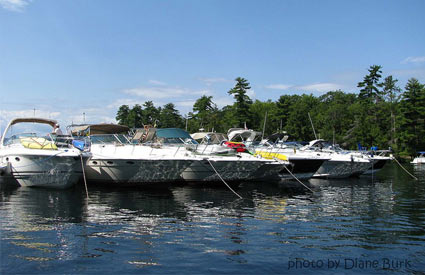 The draft of the plan, released in January, called for the installation of 30 boat decontamination stations throughout the region, which would cost an estimated $750,000 to purchase. Public and private grants are being sought to cover the costs of this endeavor. Boat launch steward data will be used to determine where the greatest concentration of invasive species is and therefore where decontamination stations are most needed.

Unlike Lake George’s regulations, which are mandatory, vessel decontamination in the Adirondacks will be voluntary, at least initially. It is believed that boaters will take a personal interest in protecting the area and will gladly utilize the stations. Although invasive species still pose a serious threat to the region, the new measures agreed upon in the Memorandum of Understanding are a significant step in the right direction.