Did you know that there are millions of French-speakers living within 2 hours of the Adirondacks? It’s true! They also have jobs, incomes, families, and varied interests that make them the perfect candidates to become Adirondack tourists. There’s just one problem preventing them from doing so – the lack of bilingual signage and printed materials in the region. 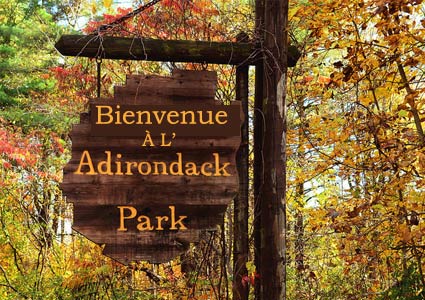 Saranac Lake Mayor Clyde Rabideau realized this problem in 2012 and has been making efforts to replace existing signage in his village with bilingual versions to attract francophones. In fact, he has even gone so far as to create a “Bonjour, Adirondacks Coalition” (BAC) to encourage other municipal governments to do the same, and his Coalition gained a few new members this week.

Tupper Lake and Lake Placid both recently passed resolutions “to replace all of their damaged and obsolete community signage with bilingual signs,” according to the Adirondack Daily Enterprise. As more municipalities sign similar resolutions and join the BAC, the region gets closer to its goal of being a hospitable and ideal destination for francophones, which could have a significant impact on tourism.

The Adirondack Daily Enterprise also reports that the resolutions “ask the [municipalities] to add French translation to their news, brochures, and advertising where practical and cost-effective, encourage local business owners to adopt the same practices,” and contribute to the efforts of the BAC.

With one of the prime tourism seasons right around the corner, it will be great to see how successful the “Bonjour, Adirondacks” campaign is at welcoming our neighbors from the north!