“Each time I visit the Adirondacks I hold my breath as I am about to pass the barn. I think to myself…. Is it still standing?” -Nick Palmieri 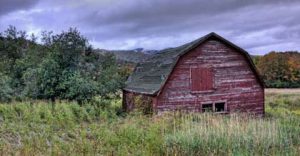 It’s a sad reality that all good things must come to an end, and the beloved old Keene, NY barn is no exception. The sagging, battered roof and weathered red walls have long indicated its state of disrepair… but then they have also given the barn a distinctive charm and character you can’t help but admire. We’ve often wondered when its final days would come… and it seems they are now here. 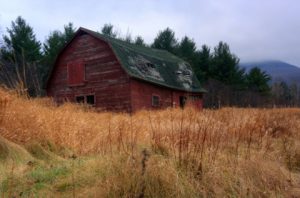 The long-vacant barn stands unpretentiously set back in a grassy field at the intersection of Routes 73 and 9N in Keene, accompanied by some brush, a few large trees and a backdrop of layered mountains. It has been somewhat of a landmark for area residents, vacationers, and really anyone else driving by. One look at the barn, and you would immediately take a mental photograph of its picturesque, “postcard” setting, no matter the season.

Unfortunately, those postcard-quality days are numbered as the barn enters its final days. With the bombardment of snow storms this winter, recent photos show the roof is finally giving way, and the rest of the barn looks soon to follow. When the total collapse might happen is anybody’s guess. 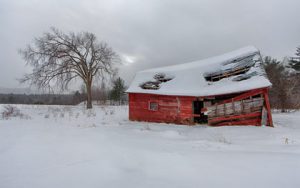 For now the barn is still standing, and you still have a chance to capture that wall-worthy photograph to treasure and commemorate the landmark before it’s gone. 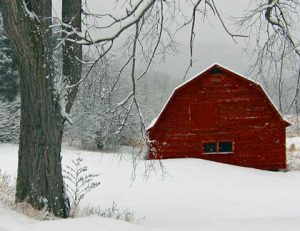 If you’re not able or skilled enough to get a proper photo in time, there are plenty of local photographers who have charted that territory for you. Many of them sell prints of the barn or offer other options, like screensavers.

“I doubt it will go down all at once, but each visit I find the barn is in further disrepair and closer to the end. It’s been defying physics and has weathered the cold Adirondack winters year after year, but sadly it cannot hold on much longer.” -Nick Palmieri 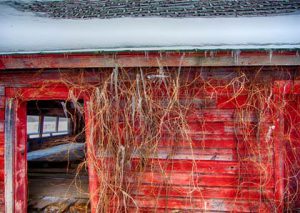 Perhaps no one has cared for the barn as much as photographer Nick Palmieri. You might have read his touching 2013 article “Losing a Landmark” in Adirondack Life Magazine or perhaps seen some of his extraordinary photography online. He has amazing photos of the barn in every season at every time of day, and when I say photos, I mean thousands of photos! He has spent hours standing in that field, connecting with his creative side and capturing stunning images of the barn and its surroundings. All photos within this article are his work. 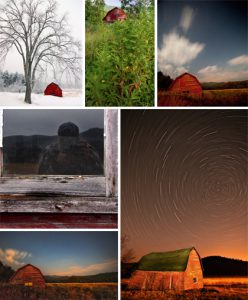 “It is not uncommon to meet other photographers or travelers at the barn,” said Palmieri. “Some have never seen it, and others have photographed it countless times. Either way, it just draws attention. It doesn’t take an artist’s eye to see the picture here, either. It looks natural, the barn belongs, it just seems part of the ‘natural’ landscape.” 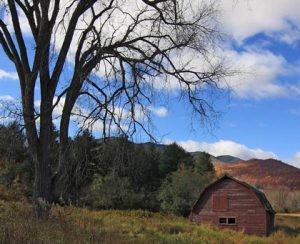 You might recall a couple of years back, there were efforts and a Facebook page organized to try to save the Keene Barn? Palmieri was the one driving those efforts. Unfortunately, despite diligent pursuit and plenty public support, the barn is on state-owned land managed by the DEC, and attempts to save it were a dead end.

“Man made structures are not allowed according to the Adirondack Park State Land Master Plan,” explained Palmieri. “Nothing short of a change to the master land plan will be able to save the barn. The plan is good, the plan will preserve natural land forever. It is unlikely anyone has the time, money or willingness to create an exception to save the barn. And if we change it for this one barn, what will be next?”

Palmieri reflects that creating an exception in the master plan may also open the possibility for something ugly, something environmentally unfriendly to follow suit. 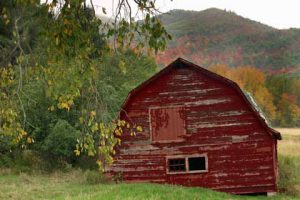 “Therefore, the only thing we can do is watch it fall, piece by piece,” he said. “When it completely falls, the state will come and clean it up, and the only thing left will be photographs, paintings, and memories. There will be nothing but a huge void in the landscape for so many of us who consider it the gateway, the welcome mat to the High Peaks.”

All photos on this page are copyright of Nick Palmieri and may not be used without permission.