Yes, you read that title correctly. Maple syrup, that sweet, delicious, innocent-seeming substance you pour over your pancakes every morning is actually involved in illicit, underground activities. Trust me when I tell you that some people take their syrup VERY seriously. 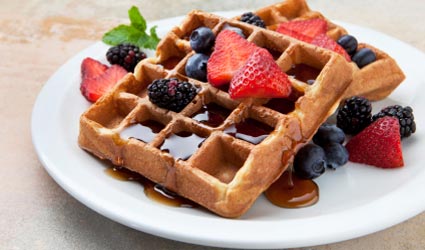 You may have noticed when you’re out syrup shopping that the stuff is NOT cheap. We’re talking around $40/gallon (I normally stick with the 12 oz bottles in an effort to keep some money in my bank account). This proves that syrup is extremely valuable, which makes sense, considering that it’s only produced in certain areas. In fact, Thrillist reports that a gallon of Grade A syrup is around 13 times more expensive than crude oil, which is where the underground trade comes in.

Economics 101 establishes that the high demand and low supply of maple syrup keeps the price up, which means that smugglers and black market dealers can command a price above market value and still find buyers willing to pay for it. In other words, if you’re really really in need of syrup for tomorrow’s breakfast and you can’t find any at the first five stores you go to, you’ll be willing to pay a higher price at the sixth store than you would’ve if they had it at the first. Illegal syrup traders have figured this out and are using it to their advantage in a lucrative (albeit criminal) way.

All of this is evidenced by “Quebec’s great maple syrup heist of 2012” when 10,000 barrels of maple syrup (worth more than $18 million) disappeared. It may sound like something out of a television series, but Canada actually has a “legal cartel”, the Federation of Quebec Maple Syrup Producers (FPAQ), that controls how maple syrup is bought and sold, how much producers can tap, and how much they are paid. The Federation even controls a reserve of the stuff so it can be sold in lower production years, which is where the loot from the heist came from. TIME has made the analogy that maple syrup is like oil and FPAQ is like OPEC. For years, many producers have been defying the cartel by going underground to fetch higher prices and sell more barrels than the cartel allows, and this was exactly the motivation behind the maple syrup heist. 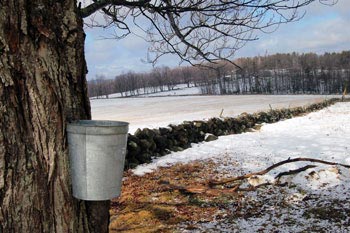 Don’t think that this issue is confined to our friends north of the border, though. Vermont and New York have large maple syrup industries that are impacted by it. When you dig down to the heart of the issue, one of the main factors influencing the black market is something that is out of everyone’s control: the weather. Certain conditions are necessary to induce proper sap production and during years when it’s too cold or too mild, the maple syrup crop will be impacted. Unfortunately, this is one of those years where abnormally cold temperatures are delaying, and potentially damaging, the production of that all-important sap. This means higher prices and even more incentive for producers to go underground. 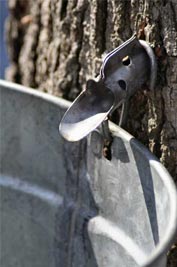 How does this impact you? Essentially, it boils down to the fact that you might see maple syrup prices continue to rise if the weather remains poor, but you shouldn’t have to worry about armed syrup smugglers sneaking around the area at night.

New York maple producers are quickly readying for NYS Maple Weekends that are coming up on March 21-22 and 28-29. If you want to support the local maple industry, check out our calendar of maple events and go buy the product directly from the source!