The moose, one of the most iconic animals in the Adirondack region, is a majestic beast. National Geographic reports that these mammals average about 5 to 6.5 feet tall, weigh around 1,800 pounds, and the males can have antlers that span 6 feet from one end to the other. It took more than 100 years for moose to repopulate the region after being forced out by deforestation and unregulated hunting in the 1800s, but a new opponent is now threatening the Adirondack moose: intellectual property. 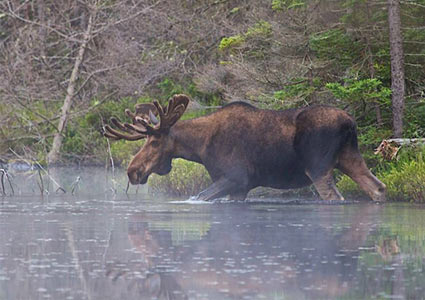 Photo Credit: Rhys Templar
It’s worth noting that intellectual property isn’t physically threatening the presence of moose in the Adirondacks, but it could make it less likely that you’ll see the moose’s name or likeness as part of a company’s brand, packaging, or advertising. This leads us to the main question of The Great Moose Debate: can the moose be trademarked?

The answer, at least for now, is yes. Adirondack Brewery in Lake George found this out the hard way when a lawsuit was brought against them by Canada’s Moosehead Breweries. Moosehead claimed Adirondack Brewery’s Moose Wizz root beer (and its corresponding packaging and labels) violated Moosehead’s legal claim on “the word ‘moose’ and the profile or silhouette of the head of the beast itself,” as reported by The Post Star.

A review of trademark law will make it clear that the moose legally can be trademarked, but should it be? Shouldn’t an Adirondack brewing company be able to name one of its products after a regional symbol? The Great Moose Debate isn’t showing any signs of resolution, but we can only hope that the majestic beast can continue to roam free through the Adirondack Park and on store shelves.

Do you have a strong opinion about ownership of the moose? Join the conversation by using #freethemoose on Twitter.