The largest land mammal in New York State is being seriously threatened by a tiny, but devastating parasite, and it is igniting deeper research into the Adirondack moose population. 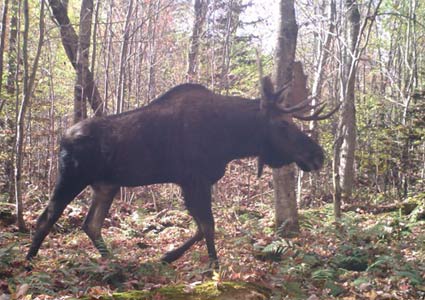 Photo Credit: Gary C. Lanphear
Winter ticks, tens of thousands of which can latch onto each moose, have been killing the beasts in Maine, New Hampshire, and in other regions of the US and Canada. For now, at least, it seems as though the Adirondack moose have not been impacted in such an extreme way, but researchers want to gather more information on moose population numbers in order to analyze trends about their health.

Some believe that climate change may be a factor in the recent explosion of the winter tick population. Warmer weather facilitates tick reproduction, which has a negative impact on the species they target. Population density could also play a role, since ticks can more freely move between densely populated creatures.

Additional measures are being taken in some states to further protect the dwindling moose populations. Both Vermont and New Hampshire are considering measures to reduce moose hunting, including eliminating a number of moose hunting permits. Moose are a protected species in New York, and therefore cannot be hunted.

NCPR reports, “The research being done this winter is expected to shape a management plan for moose, one that will be based on a far clearer understanding of their numbers, health, and distribution.”