The stately Merrill Magee Inn, located in the center of Warrensburg NY, sat abandoned and neglected for three years. The Victorian gardens and elegant interior of the Inn had long formed the backdrop for romantic Adirondack getaways and weddings, delicious meals and family get-togethers. Now a Warrensburg couple is bringing the Merrill Magee House back to its former glory. 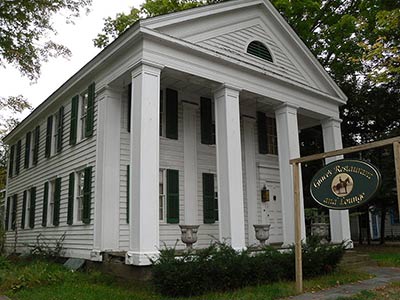 Donna and Mike Flanagan, along with Mike’s brother Richard and his wife, Lisa, recently purchased the Inn, which is registered on the National Register of Historic Places, after it went into foreclosure.

Donna and Mike had spent an unplanned, overnight stay at Merrill Magee more than 10 years ago. That stay ultimately prompted their relocation to the village of Warrensburg after realizing how much they enjoyed the area.

When friends and family would visit them, they would often fill the Inn. Watching it sit neglected and abandoned for so long, the team was moved to fully restore it.

“This place was a wreck when we started working in here,” Mike Flanagan told the Post Star. “The building was built very well, but it was abandoned for three years. There were leaks, water coming in through the roof, ceilings falling down. The heat had been off; there were pipe bursts all over the place. There was flooding in the basement. It was awful.”

In this interview with the Post Star, the Flanagans estimated they will be spending over $1 million dollars to bring back the property from its disastrous state. Between the new restaurant, purchase of an adjacent property for a new parking lot and entrance, restoration of the gardens (including its iconic white picket fence!), new solar energy infrastructure and a complete renovation of the Inn itself, they will definitely have their hands full.

To help in their tremendous efforts, the Flanagans have brought back Merrill Magee’s former innkeeper, Dan DelGaudio. DelGaudio moved to the Batcheller Mansion Inn in Saratoga Springs after Merrill Magee closed in 2011.

He told the Post Star that he refused to visit Warrensburg in order to avoid seeing the condition the Inn was in while sitting idle. “…when I first came up — when Mike and Donna contacted me – my stomach
just kind of dropped. Everything was overgrown. The buildings were in
disrepair, and the roofs were missing. Siding was missing.” He continued by saying, “So, for me, it’s kind of like personally coming home and taking care of grandma.”

The Inn’s 10 beautifully decorated and comfortable bedrooms are open and serving visitors. You can find rates and special offers on their website.

The new restaurant on the premises will seat 150, employ 15 to 20 people and be available for weddings and special events once the renovations are complete, currently planned for sometime this summer.