Your Guide to the Adirondack Region
Enter Giveaways Advertise
Home  »  Business  »  The End of an Era: Norman’s General Store Closes Its Doors

The Adirondack Daily Enterprise has reported that Norman’s General Store, a beloved fixture in Bloomingdale for over a century, quietly closed its doors this past week. Norman’s was one of the oldest small-town and family-run stores in the Adirondacks and will be greatly missed by the community. 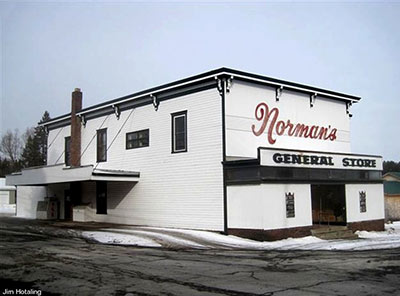 Photo Credit: Jim Hotaling via localwiki (license)
Norman’s General Store’s faded sign out front reads that it opened for business in 1904 and it’s hard to imagine the town of Bloomingdale without it.

Norman’s grew to become somewhat of an institution in town due to its unique nature. It was a place that carried an incredible feel of nostalgia and where you could see everybody in town. It sold everything from great meats and cheeses to pocket knives to Spaghetti-O’s. Many feel as though it’s the last of its kind.

The store would usually close for a couple weeks every year so the owner, Art Niederbuhl could take a vacation. However, it did not reopen when expected and Bloomingdale’s residents began to wonder what was going on.

Neiderbuhl confirmed the closure to the Enterprise this past Friday. “We’re not going to reopen, not in the near future. We’re restructuring and going to figure out something else to do. What we’ve been doing hasn’t been working very well the last few years.”

What’s next for Neiderbuhl and Norman’s? He’s not quite sure. He told the Adirondack Daily Enterprise his options include to “possibly sell it, possibly lease it, possibly reopen it as some other type of operation.”

While the future is uncertain for the store, we do know one thing for sure: It will most definitely be missed by the Bloomingdale community.