As pollution, urban expansion, and climate change continue to threaten the existence of rare and declining species in the Adirondacks, the New York State Department of Environmental Conservation (DEC) has drafted a plan that it hopes will combat some of these forces. The Daily Freeman has reported that the DEC is currently welcoming public comments on the 10-year plan, and a public information session has also been scheduled. 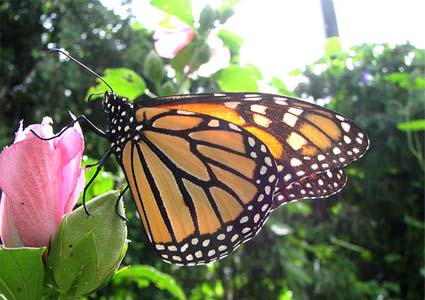 Photo Credit: Monarch In The Garden via photopin (license)
According to The Daily Freeman, the plan identified 366 species of fish, insects, birds, and reptiles that are most threatened by human activities, while 167 of those were given a high-priority tag. The specific species mentioned vary in size, physical makeup, and habitat, and include little brown bats, queen snakes, horseshoe crabs, American bumble bees, mink frogs, monarch butterflies, northern diamond-backed terrapins, moose, and lake sturgeon, among others. The DEC proposes taking action to protect the species listed, as well as the plants that serve as their sources of food or shelter.

The plan also identified nearly 3,000 threats, 673 of which were “considered to impact 71 to 100 percent of the state.” Inadequately treated sewage, “industrial effluents,” agricultural and forestry pollution, and airborne pollutants were some of the most severe threats.

View the draft for yourself to determine whether or not you need more details or clarification on any portion of it. A public information session will be held at 2:00pm next Tuesday, June 23, at the DEC’s Region 3 office: 21 S. Putt Corners Road, New Paltz. Written comments may be submitted