In the 19th century, unregulated hunting, the desire for pelts, and deforestation completely wiped out a number of species that were native to the Adirondacks. Some species, like beavers, have since repopulated the region with the help of public and private individuals, but others are still absent from the Park.

As the New York State Department of Environmental Conservation works to finalize its Wildlife Action Plan Update, one group is calling for the DEC to consider reintroducing two formidable predators to the Adirondacks. 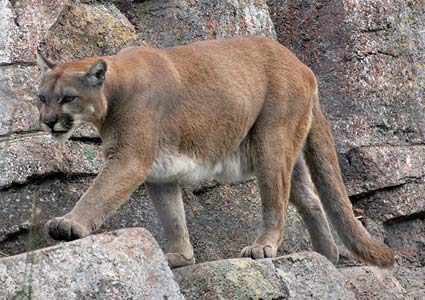 Photo Credit: Mountain Lion via photopin (license)
Eastern gray wolves and cougars were once two of the top carnivores in the Adirondacks, but neither species has had “a resident population” in the Park during the last 150 years, according to North Country Now.

Although the species are both considered to be extinct, there have been numerous sightings over the years. North Country Public Radio cited a Wildlife Conservation Study in the 2000s that “found there have been roughly 180 cougar encounters in New York State alone since the 1960s.” While not all of these sightings are reputable, the large number does suggest that some cougars may have made their way back home.

There was also a wolf killed north of Great Sacandaga Lake in 2001 that was determined by scientists to be wild. Although they couldn’t tell where it came from, it was a unique find, since the last wolf in the Adirondacks was reportedly killed in the late 1890s.

Since wolves and cougars were wiped out, coyotes have stepped in to fill the predator niche. Even so, there are many who believe that the food chain is not complete and the Adirondack ecosystem is not stable without these major carnivores.

Leading the charge to convince the DEC to consider reintroducing wolves and cougars is Protect the Adirondacks, a not-for-profit group dedicated to protecting every aspect of the Park.

Regarding the potential for these species to repopulate on their own, Executive Director Peter Bauer said in a statement, “We cannot rely on natural recolonization for cougars from the west. Aggressive hunting seasons are starting to reduce the overall populations and it’s unrealistic to think that enough males and females will reach the Adirondacks to establish a viable population. Wolves are also highly unlikely to recolonize a viable breeding population.”

Protect the Adirondacks is adamant that adding wolves and cougars the Wildlife Action Plan is the best first step to take toward restoring these native animals to the region. The document is now closed to public comments, but the plan has yet to be finalized.

What do you think about reintroducing wolves and cougars? Is it brilliant, crazy, or somewhere in between?