In honor of the structures that played an integral role in wildfire containment from 1909 until the 1970s, the Adirondack History Center Museum in Elizabethtown will be hosting a fire tower program next week. 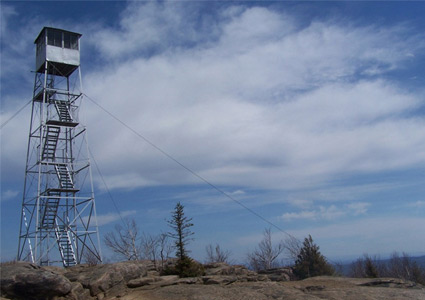 Photo Credit: Fire Tower Secured By Guidewires via photopin (license)
Fire towers were constructed atop mountains throughout New York State after a series of particularly devastating fires charred almost 1 million acres of forest in the Adirondacks. From these high perches, observers could see smoke from great distances, identify exactly where it was coming from, and alert fire crews who would be dispatched to fight the blazes.

The Adirondack History Center Museum is the perfect location for a fire tower program because it has an actual tower on its property. The structure was put up in the early 1990s and was constructed from portions of the towers that once adorned West and Kempshall Mountains.

The program will take place from 9:00am – 3:00pm on Wednesday, August 12, and features two parts: an in-museum portion and a guided hike. During the in-museum portion, “participants will learn about the history of fire towers with a guided tour of the museum’s permanent fire tower exhibit,” Lake Placid News reports.

Afterwards, participants will take part in a guided hike up Poke-O-Moonshine Mountain to get a first-hand view of the fire tower that still sits on its peak, almost 100 years after it was originally constructed.

Lake Placid News identified a statement in which museum Director Aurora McCaffrey said, “Fire towers are one of the emblematic sights in the Adirondacks, and this program offers insight into the history of these structures and the important role they played in fire protection and local history.”

Participants may be inspired to learn more about fire towers or even get started on the fire tower hiking challenge after taking part in the program!