Before the rails vs. trails debate has even been resolved, a railroad in the Adirondacks has already found itself at the center of a brand new controversy. It was recently announced that owners of the Saratoga & North Creek Railway plan to store hundreds of decommissioned oil tanker cars on unused sections of track within the Blue Line, and the announcement has environmental groups and concerned citizens up in arms. 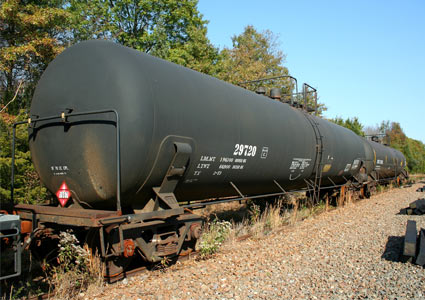 The Railway sees tanker car storage as a viable business opportunity that would provide it with funds it has been desperately needing in recent years. With Canada and the United States making changes to tanker car standards, tens of thousands of tankers are being temporarily decommissioned. Owners of the cars are seeking storage options where they can place the cars while they await retrofitting or a trip to the scrap yard.

The Saratoga & North Creek Railway is part of the Iowa Pacific Railroad, which has successfully stored oil tanker cars on unused sections of its track in Colorado. In the Adirondacks, the Railway is eyeing a section of its track that runs through Essex County, the Sanford Lake line, as the ideal location for tanker storage.

While the Railway is certain that this plan would be in its own best interest, environmental groups are hesitant to agree. Although the oil tanker cars will technically be “empty” while stored, The Post Star reported, “A tank car that is considered empty can have up to 200 gallons of liquid inside and can generate significant vapor,” creating a potential for explosion. Iowa Pacific Holdings President Ed Ellis, on the other hand, was noted by The Times Union as saying, “The tankers would contain only oil residue and pose a ‘virtually non-existent’ risk of explosion or fire.”

In addition to the concern surrounding the potential for conflagration, groups have expressed their displeasure about the location of the track the Railway wants to use for storage. The Sanford Lake line runs through state forest preserve lands in the heart of the Adirondack Park, and the legality of using such a tract for this purpose is being questioned.

Also up in the air is the matter of approvals that would need to be granted for such a project to move forward. Ellis insists that because the Essex County stretch of track is owned by the railroad, he is able to store cars there, but others are calling for a governmental review of the plan.

What do you think about plans for hundreds of empty oil tanker cars to be stored in the High Peaks? Is this a good strategy to keep a tourist railroad in business, or will it be a potential safety threat and/or scar on the face of the Park?