When an attraction is as cool as The Wild Center with its new Wild Walk, exhibits, and workshops, it’s bound to draw thousands of visitors. Earlier this week, The Wild Center announced that not only had thousands of people come to experience all of its offerings for themselves, but 100,000 people had! 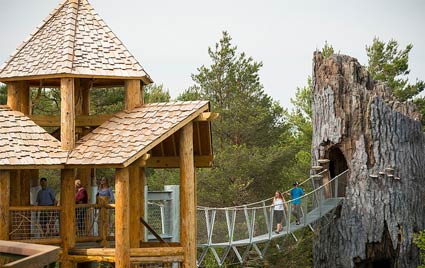 Photo provided by The Wild Center
The official 100,000th visitor of the season was Keira Lay who was visiting with her parents and siblings from Centerport, NY. In fact, it was the youngest member of the family who delayed their entrance to the Center when he got stuck in the bathroom. Had the family not been forced to wait those few extra minutes, they wouldn’t have been in the lucky position in line!

Keira Lay wasn’t the only winner; Facebook fan Erin Duval of Crown Point won Tupper Tapper syrup for placing the closest bet as to when the 100,000th visitor would arrive at The Wild Center.