It’s that time of year when New York’s bat population begins its seven-month-long hibernation. Although adventurers may be tempted to explore caves and mine sites where bats could be hibernating, the DEC recently issued a statement urging otherwise. 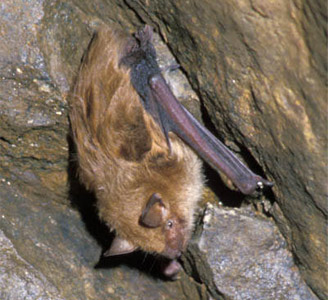 Photo Credit: Gerry Lemmo
According to the DEC, human disturbances during hibernation can put bats at serious risk by forcing the mammals to raise their body temperatures, thereby depleting their fat reserves. This has a negative impact on their energy levels, and can often lead to death.

Adding to the problem is the presence of white-nose syndrome, a disease that “has killed more than 90% of bats at most hibernation sites in New York,” the DEC reports. The disease, for which an effective method of treatment has yet to be found, makes bats more susceptible to disturbances and the resulting compromised state.

The northern long-eared bat and the Indiana bat are the two species currently protected under federal and state endangered species law, but all types of bats should be respected this winter. The DEC urges everyone to obey posted notices restricting the use of caves and mines, and recommends leaving the area as quickly and quietly as possible should hibernating bats be encountered.

The DEC also encourages homeowners to explore non-lethal means of removing bats from their attics or barns in order to further protect their dwindling numbers.