In June, the Department of Environmental Conservation released a draft of the Essex Chain Lakes Complex Unit Management Plan (UMP) that called for an expansion of recreational opportunities on 19,600 acres of lands and waters in the Central Adirondacks. Last month, the Adirondack Park Agency (APA) approved the plan, but many environmental groups and opponents are pushing back. 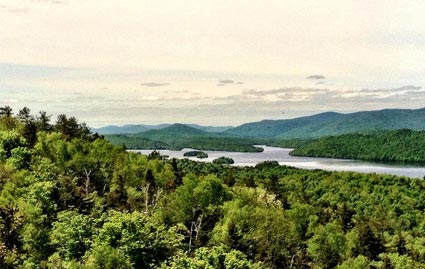 Photo: Elaine Supp via Adirondack.net Facebook Page
Among the management actions called for by the UMP are the creation of a multi-use trail system and Class II community connector snowmobile trails, addition of various types of camping opportunities, and legalization of public motorized access on designated roads.

Those in support of the UMP point out the potential for increased tourism, and subsequent boosts to the economy from those who will be taking advantage of local dining, lodging, and shopping options.

In a statement, Keith P. McKeever of the APA said, “The plan establishes reasonable public access and ensures appropriate protections for the unique natural resources found in this splendid region of the Adirondack Park.”

Opponents are not so quick to accept the legality of the UMP and argue that it violates certain provisions of the Adirondack Park State Land Master Plan and New York’s Wild Recreational and Scenic Rivers Act that were enacted to protect the region’s rare beauty and uncommon resources.

Of the two APA Commissioners who dissented from the plan’s approval, one called it “legal fiction” and the other called it “illegal.” Environmental group Protect the Adirondacks described the plan in a statement as “widely illegal.” Even the principal author of the State Land Master Plan and the Wild Recreational and Scenic Rivers Act, Peter Paine Jr., told North Country Public Radio that the passage of the plan is in violation of environmental laws.

“This UMP approved a snowmobile trail through a trailless and wild part of the Forest Preserve that has not seen an axe in 100 years,” said Protect the Adirondacks Executive Director Peter Bauer in a statement. “This UMP continues to implement the greatest expansion of motorized uses in the history of the Forest Preserve.”

What do you think about the Essex Chain Lakes UMP? Are you in support of expanded recreational and tourism opportunities, or do you see the plan as violating key environmental laws?