Do you wish it was possible to spend multiple days hiking and exploring in the Adirondacks without having to camp, carry large quantities of equipment, or battle moisture and bugs while you’re trying to sleep? If all goes as planned, this dream could soon become reality in three areas of the Adirondacks. 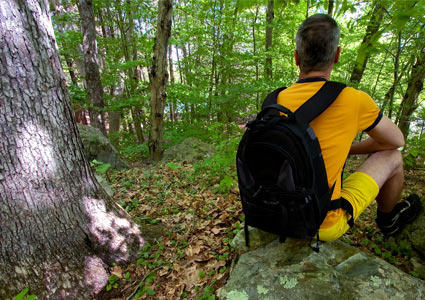 The proposed Adirondack Community-Based Trails & Lodging System (ACTLS) would create trail systems and accommodations that could be used by those who wish to carry only a light daypack and experience better shelter and amenities than are afforded by traditional camping.

This “hut-to-hut system,” as it is referred to throughout the world, places lodging options 8-12 miles apart connected by trails that users can hike, bike, walk, ski, and snowshoe on. Contrary to the name, the accommodations aren’t small huts, but are typically lodges that can sleep groups of people and offer toilets, stoves, and even showers.

Research has already begun on the feasibility of such a plan, with work being done by an expert team as well as students from Clarkson University. According to Lake Placid News, findings indicated that approximately 70% of the trails needed for the system are already existing, and project organizers are planning to leverage existing lodging options as well.

For those places where lodging isn’t already available, the goal is to encourage private landowners to build shelters on their property that can be used by recreationists, so the controversy of building on public land can be avoided as much as possible.

The ACTLS group plans on first introducing hut-to-hut hiking in the Great South Woods of the southern Adirondacks, the Five Towns area (Newcomb, Long Lake, Indian Lake, North Hudson, and Minerva), and in and around the Tri-Lakes area.

Although project leaders Jack Drury, Joe Dadey, and Duane Gould couldn’t give away much information during a recent talk at Paul Smith’s College VIC, they did “hint that some parts of the system may be getting the go-ahead from the state soon,” according to Lake Placid News.

The goal of such a system is to provide enhanced recreational opportunities that attract tourists to the Adirondacks and boost the region’s economy. What do you think about the hut-to-hut plan? Will it accomplish its objectives?