In 2013, a controversial project was announced by the New York Departments of Environmental Conservation and Transportation to remove a 34-mile section of the Adirondack Scenic Railroad between Tupper Lake and Lake Placid and transform it into a multi-use trail. To combat this proposal, the Preservation League of New York State has recently included the endangered track in its annual “Seven to Save” list to help encourage negotiations about the track’s future. 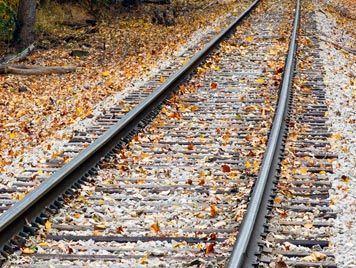 The idea of turning rails into rail-trails isn’t new, but the Adirondack Preservation League hopes to bring awareness to the overall impact that removing the 34-mile track would have on the area.

The centuries-old rail lines are spread throughout the western and central Adirondacks. The Adirondack Scenic Railroad currently generates over $3.7 million in terms of economical impact, as well as an additional $5.4 million in leverages. Speaking with WAMC, Steven Engelhart, executive director of the Adirondack Architectural Heritage, voiced his support for the track’s survival, stating, “here we have the state taking an action that will have a big economical impact.”

The proposed project would directly affect the Remsen-Lake Placid Travel Corridor, which is a part of the historically significant railroad. Since the rail line is still in use, removing a large piece of track would permanently separate Lake Placid from the popular rail route, replacing it with a more recreational, multi-use trail. Supporters for keeping the railway intact believe this type of trail can be built around the track rather than replace it completely.

However, others believe replacing the track shouldn’t be a major issue. “In reality many other historic rail lines have been turned into rail-trails without objection,” said Tony Goodwin, founding director of Adirondack Recreational Trail Advocates, in a conversation with WAMC.

What do you think about the plan to remove the 34-mile track? Do you support its recent “Seven to Save” designation?