Rowers can rejoice – the Village of Champlain’s summer rowing program on the Great Chazy River is set to resume next month. 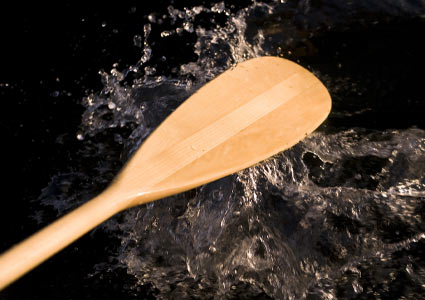 After a successful first year, the Village of Champlain is forging on with its 2016 rowing program plans. Some details are still being discussed, such as exact times and dates, and the route itself will depend on water conditions and the experience level of those rowing.

“It was extremely popular last summer,” Village Trustee Janet McFetridge told the Sun Community News. “We had a blast and we’re hoping for another great summer.”

Last year, the program had about 20 regulars rowing every Friday evening from June to October, and McFetridge is hoping to add an extra day this year.

The program was launched last year as the Village aims to promote more outdoor recreation – particularly physically engaging activities that get the whole community together. The Lake Champlain Maritime Museum, located across the lake in Vermont, gave the Village a grant to implement the rowing program as part of their initiative to expand the Champlain Longboats Program.

The Museum sent over a 32-foot long, six-oared pilot gig rowing boat and a four-oared, 25-foot Whitehall style rowing boat. These boats were built by high school students at the museum boat shop as part of the Champlain Longboats Program, which is both a boat-building and rowing program striving to develop positive behavior in middle and high school students.

New this year, the Village is constructing a kayak rack to add to the boating opportunities. Many residents voiced a desire to kayak on the river, but had trouble transporting the boats.

The rack will be placed in Bill Earl Park at the end of River Street, near the boat launch on the Great Chazy River. It will be able to hold up to eight boats at a time, with participants providing their own locks. The $200 structure is set to be completed by the end of this month.

In addition to the rowing program and the kayak rack, the Village is also partnering with the Town of Champlain and the Village of Rouses Point to implement a walking and biking trail running through the three municipalities. The trail is expected to undergo construction in Spring 2017.

Between the walking and biking initiatives being developed, the continuation of the rowing program, and the increased opportunity for kayaking, the Village is certainly stepping up its commitment to offer more community-focused outdoor recreational activities.

McFetridge is also hoping to establish a competitive teenage rowing team in Vermont, sponsored by the Museum; she attempted this endeavor last year and did not have enough teens sign up. However, she appears optimistic this year about getting more participants – teens and adults – to join in the fun.

“To be out on the river is so calming and it’s a great community activity,” McFetridge told the Sun Community News. “Anyone can do this and everyone is welcome.”