The Town of Minerva has been attempting to rid their prized lake of the invasive plant species milfoil for the past decade with little success. This year, the removal method is being switched up for something new. 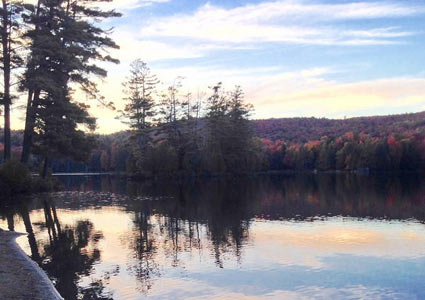 The Adirondack Park Agency recently approved the DASH method, and the town has allotted up to $75,000 for funding – a significant increase from $50,000 last year.

“Minerva Lake is our largest asset,” Town Supervisor Steve McNally told the Sun Community News. “This is our priority.”

DASH involves the use of suction to get rid of the plants, with the invasive species being sucked directly into bags. The bags can then be composted at least 120 feet away from a water source. This suctioning allows for a nearly complete removal of the root system, reducing breakage that would allow the milfoil to reroot itself.

Larger-scale mechanical harvesting operations can remove native species as well as invasive ones, which doesn’t happen with the suctioning technique. DASH targets smaller areas, allowing only the unwanted plants to be removed.

DASH also differs from the prior method used in Minerva Lake of hand-harvesting, which allows substantial room for human error in the form of broken plants and insufficient root removal. DASH is also more time efficient than hand-harvesting.

“We can pull as much in two weeks as has been done all summer,” Dominic Jude, Vice President and diver of Aqualogic told the Sun Community News.

The milfoil will likely not be immediately and completely eradicated. However, the DASH method is expected to substantially reduce the invasive plant, allowing less to be managed each year going forward.

Deputy Supervisor Keith Dubay compared the unsuccessful attempts of the past 10 years to putting your hand on a hot stove after you’ve been burned.

“It’s like sticking your hand on a hot stove every year,” he told the Sun Community News of continuing with a technique that fails to show progress.

Minerva Lake is considered to be a prime breeding space for invasive growth. The man-made lake has a lot of sediment, and the plants can grow up to any depth as long as the sunlight can reach it. The lake is about 10 feet deep, with 10 of the 83 acres substantially stuffed with milfoil.

The Aqualogic team, consisting of two divers and one tender, are spending about six hours in the water each day, and they’ve started earlier than they normally would thanks to a mild winter. The lack of snow and ice has also allowed more sunlight into the lake during the winter, meaning extra growth of milfoil.

Aqualogic is not just in it for the money – the team really cares about removing invasive species.

“We are passionate about cleaning the water,” Dominic Jude, the company’s Vice President told the Sun Community News. “Eventually, if we clean everything, we will work ourselves right out of a business…and I’d be all right with that.”