The National Park Service’s American Battlefield Protection Program (ABPP) has recently named the recipients of its 2016 grants, which total $1.198 million. New York State alone received funding for five projects – the most awarded to one state – and three of them involve battle sites in and around the Adirondacks! 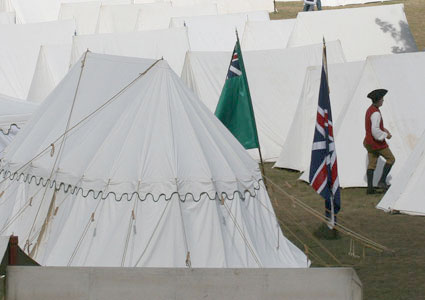 The ABPP was created in 1991 by the Secretary of the Interior. The program’s goal is to promote the preservation of American battlefields for future generations. More than 650 battlefields have been surveyed by the ABPP and its partners, which includes academic institutions, tribal governments, non-profit organizations, and more.

Additionally, the ABPP operates a yearly grants program for battlefield preservation project proposals. Over 513 Battlefield Planning Grants have been awarded since 1992. This year, the ABPP awarded 20 grants in support of preservation projects across 12 states. The battle sites centered around the Adirondack Park are in Lake George, Plattsburgh, and Fort Ann.

Lake George’s Fort George project will focus on putting together a comprehensive inventory of the sites and features that are connected to its history. Part study and part archaeological field survey, the project will result in the development of new signage to better inform the public about Fort George and its associated sites.

Plattsburgh’s $54,000 battlefield preservation project is more widespread and encompasses six historic battle sites in the northern region. The first, Valcour Bay, is believed to be the site of an early naval battle during the Revolutionary War. The other five sites were involved in the Battle of Plattsburgh during the War of 1812: Crab Island, Plattsburgh Bay, Fort Brown, Fort Moreau, and Fort Scott.

Plattsburgh’s project will combine regional planning, community involvement, land surveys, and primary source documents to develop a preservation plan and ensure visitors will have an opportunity to learn about the six battle sites.

Fort Ann’s Raymond W. Harvey American Legion Post 703 received a significant grant of $80,000 to fund an archaeological survey of the area where the Battle of Fort Anne occurred during the Revolutionary War. This battle involved the British army defeating a Continental force that had retreated from Fort Ticonderoga.

The field study will be used to create a preservation plan for the battle site. Afterward, the information gathered will be presented to the public and provide a greater overview of the history of the Battle of Fort Anne.

The other two New York grants were awarded to the Seneca Nation of Indians Tribal Historic Preservation Office ($46,000) and the SUNY Buffalo Research Foundation ($23,200).

All of this year’s projects are designed to further the preservation of the battle sites, as well as share any newly discovered information about them with the community.