Governor Andrew Cuomo recently announced that Plattsburgh was declared the winner of the Downtown Revitalization Initiative. Plattsburgh neighborhoods will be restored and revamped so that generations of New Yorkers will be motivated to live and work in that community. 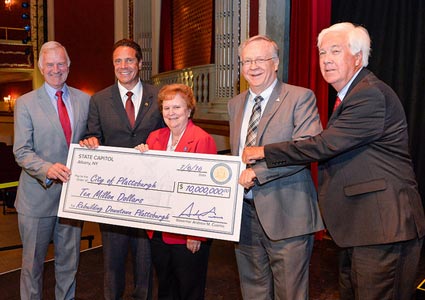 “Over the last six years, our Regional Councils have played an integral role in generating economic opportunity in communities across the state,” Gov. Cuomo said in a statement. “The Downtown Revitalization Initiative will build on that momentum by investing in local assets to attract jobs, private investment, and transform the downtown areas into vibrant, diverse, and economically active hubs.”

Downtown Plattsburgh is a hot spot in Clinton County. Increased job growth in the area within the past few years has subsequently increased the housing demand and retail developments.

Under the DRI, Plattsburgh will be building on recent investments, including restoration of historic buildings, expanding the farmers market, and further widening the variety of retail and housing options.

Plattsburgh was chosen to receive this funding based on a number of criteria, including but not limited to: a compact and well-defined neighborhood; properties or characteristics that could contribute to the livability of downtown if enhanced; local and community support, including among leaders and stakeholders; and recent job growth.

“Governor Cuomo’s unprecedented Downtown Revitalization Initiative acknowledges that thriving urban centers are key to changing attitudes and bringing people back to our communities,” Regional Economic Development Chair Lieutenant Governor Kathy Hochul said in a statement. “I have seen first-hand how revitalizing one downtown can be transformative for an entire region. With support from the Regional Council, that’s exactly what we expect will happen here.”

There will be a Round VI of the Regional Economic Development Councils initiative that will award more than $750 million in state funding and tax incentives. This year, the 10 Regional Councils throughout the state will be competing for the designation of Top Performer. The top five performers will receive up to $25 million in grant funding, with $10 million going to each of the remaining five.

Plans for the revitalization of downtown Plattsburgh are expected to be completed by early 2017.