Your Guide to the Adirondack Region
Enter Giveaways Advertise
Home  »  Community  »  Is the Newcomb-Minerva Snowmobile Trail Project in Jeopardy?

Back in 2015, the Adirondack Park Agency approved of the New York State Department of Environmental Conservation’s (DEC) Community Connector Trail Plan, which involves connecting the Towns of Newcomb and Minerva through a new snowmobile trail. Although the DEC has worked on the trail as recently as July 2016, an injunction has halted all tree cutting and construction for the time being. 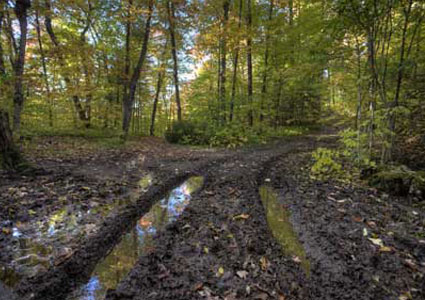 The end goal of the DEC’s 2015 Community Connector Trail Plan is to establish a snowmobile trail network for Long Lake, Minerva, Newcomb, North Hudson, and Indian Lake. The snowmobile trails would improve access between the communities, and the plan is to make them accessible year round.

The four-season trail network would help increase recreational activity and provide an economic boost to the communities. For example, businesses that are open in winter would have more customers if people are able to snowmobile from town to town.

Last year, Long Lake Town Supervisor Clark Seaman told WAMC, “The hope is that we’ll attract enough visitors throughout the year that it will have a positive impact.”

Since fall 2015, the DEC has worked on a new 9 to 12 foot wide Newcomb-Minerva snowmobile trail. They’ve successfully completed about 6 miles of the proposed 14 mile-long snowmobile trail up to this point; however, an injunction against the DEC has halted further work.

The injunction, filed by Protect the Adirondacks, was in reaction to the amount of tree cutting being done to create the Newcomb-Minerva snowmobile trail. Since the DEC started work on the trail, at least 5,000 trees have been cut down.

This past spring, the DEC estimated it would have to cut just over 1,600 trees greater than 3 inches diameter at breast height (DBH) for 7 miles of new trail. Protect the Adirondacks has estimated the number of trees with a DBH of less than 3 inches that would have to be cut down, and the group believes over 9,000 trees would be at risk.

Additionally, the injunction challenges whether or not this snowmobile trail project violates Article 12, Section 1 of the NY Constitution, which protects trees on the Forest Preserve as “forever wild.” The constitution states the destruction of Forest Preserve timber is prohibited, and the new trail does cross into the Vanderwhacker Mountain Wild Forest Area.

For now, the Appellate Division, Third Department of the New York State Supreme Court has upheld the injunction against the DEC.

A decision by a State Supreme Court Judge is expected soon, which could set a precedent for future work in Forest Preserve lands.