Your Guide to the Adirondack Region
Enter Giveaways Advertise
Home  »  Community  »  Will Overcrowding Jeopardize the Future of Hiking the High Peaks?

Have you been hiking in the High Peaks recently? Did you encounter a lot more people than usual? If so, you’re not alone. The High Peaks Area has become extremely popular for tourists, and not only are they crowding the mountains, but trails are being damaged by leftover waste. Unfortunately, the solution to these issues won’t be simple. 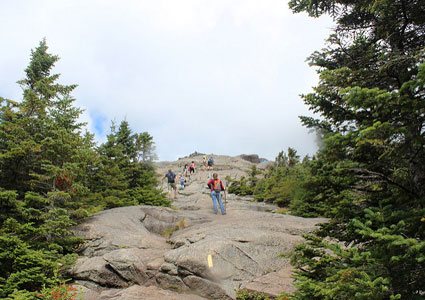 Photo Credit: Mike Tracy
Many of us in the Adirondacks love hiking, so overcrowding on the High Peaks is a major disappointment. Far away from highly populated areas, the High Peaks were once the perfect place to escape to and enjoy a private hike in the wilderness.

Now, with the rise of hiking challenges and the popularity of the High Peaks, those private escapes may be lost. All 46 peaks have become tourist destinations, and large crowds have left behind damage and destruction to the trails.

While overcrowding on the High Peaks has been an issue in the past, a recent incident has brought it back to the forefront.

The Adirondack Almanack reported that at the end of this August, two buses from Quebec dropped off 67 passengers at the Adirondack Loj trailhead. This trailhead is the starting point of the Algonquin Peak hike – one of the High Peaks. Although small groups are welcome to hike together on the High Peaks, there is a group limit of a maximum of 15 people.

Other hikers noticed the size of this group and alerted a Department of Environmental Conservation (DEC) forest ranger who ticketed its two leaders. The charges included exceeding the day-use group maximum of 15 people and guiding without a license.

Both charges are prohibited in the High Peaks Region, and each comes with a possible penalty ranging from a $250 fine to 15 days in jail.

One of the leaders of the group told the Adirondack Almanack the 67 people were split into six groups of 10-15. He emphasized the groups were separated one mile apart – another rule in the High Peaks for larger groups.

Although this is just one incidence of overcrowding, studies have shown an increase in the amount of traffic in the High Peaks Wilderness. According to the Adirondack Explorer, the DEC has determined hiking traffic has doubled at some of the High Peaks trailheads over the past decade, specifically at Cascade and Mt. Marcy.

More hikers means more people who may not follow the principle of “leave no trace,” resulting in the degradation of trails, but how can we resolve this growing problem?

One of the suggestions presented by the Adirondack Almanack is to increase DEC forest ranger staffing levels in the High Peaks Region. High Peaks forest rangers have had to focus more on search and rescue missions, so little time is spent patrolling and maintaining the lands.

On the other hand, the Sun Community News Editorial Board has come up with an intriguing concept to address the popularity of hiking. The editorial piece points out that hiking is free, unlike other recreational activities such as boating, snowmobiling, fishing, and hunting.

Basically, the editorial discusses the possibility of an annual hiking permit with a small fee. Some of the revenue generated would then be used by the state to help maintain this activity and boost forest ranger funding.

What do you think needs to be done to save the High Peaks?