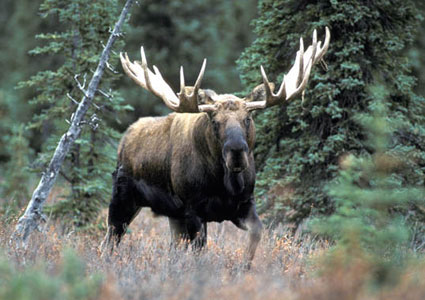 Photo Credit: Gerry Lemmo
The moose hunting bill’s official description on the New York State Senate’s website states, “Regulates taking of moose in the same manner as deer hunting and trapping are currently regulated.” In other words, the bill calls for moose hunting guidelines similar to those that exist for other hunting seasons.

Sponsored by New York State Senator Patrick Gallivan, the bill would authorize the Department of Environmental Conservation (DEC) to establish moose hunting rules and regulations, including:

In a press release, Gallivan said, “This legislation will allow the state to better manage the moose population and provide new opportunities for hunters in New York and neighboring states.”

Despite the approval of the New York State Senate, there are concerns about the need for this moose hunting bill. Most of New York’s moose are found within the Adirondack Park, which has led the species to become one of the region’s most iconic animals.

In states where moose hunting is legal, such as New Hampshire, there has been a drop in the amount of hunting permitted. According to Lake Placid News, ticks and diseases have caused a decrease in Northeastern moose populations as recently as last year, making over-hunting a potential issue in those states.

In 2010, the DEC estimated there were about 500-800 moose in New York State. There is currently an ongoing study of the status of New York’s moose population, which will help the DEC develop a management plan. Any moose hunting guidelines would have to consider local population levels and the impact of hunting.

While the bill was approved by the State Senate, it still has a ways to go before the state considers moose hunting guidelines. The bill needs to pass the State Assembly, which it failed to do last year, and then it must be delivered to Gov. Cuomo to be signed or vetoed.

Do you believe moose hunting should be added to New York’s hunting seasons?