Your Guide to the Adirondack Region
Enter Giveaways Advertise
Home  »  Attractions  »  Will State Plans for a Recreational Trail Put an End to Rail Explorers ADK?

Rail Explorers CEO Mary Jo Lu may have to end her popular tourist attraction’s Adirondack adventures if the state’s plans to convert the existing Adirondack railroad into a multi-use trail come to fruition. 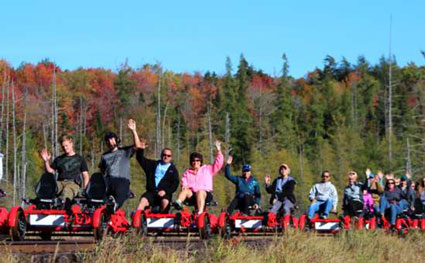 We are all familiar with running and biking rail trails, like the one proposed by the state to replace the disputed piece of track in the Adirondacks. Rail Explorers, however, is an exciting and different take on repurposing infrequently used scenic tracks.

Rail Explorers takes tourists on pedal tours of scenic railways. Its pedal-operated railcars currently offer tourists a unique, relaxed way to experience Upstate NY and Delaware. The company recently told the Adirondack Daily Enterprise that they plan to expand into the Catskills and potentially Rhode Island next year.

When we asked Mary Joy Lu how the proposed plan to convert the tracks into a recreational trail would impact her business and the surrounding community, she was understandably disheartened and frustrated.

“We have many plans for Rail Explorers ADK 2017 – looking at longer ‘Safari Stye’ adventures in the Tupper Lake region [and] more special activities with themed tours and experiences,” said Lu. “One giant hiccup to all this incredible development and our success story is that the Governor wants to rip up the railroad to create a rail trail to provide economic impact! Well we have given him one already!It’s there! It’s here! It’s happening! AND it did not cost the State a thing! The trail will cost at least $20 million dollars just at the beginning stages…”

Rail Explorer’s contribution to the Adirondack economy is quite significant, both in attracting tourists and providing employment. Lu reported that the company will hit over 20,000 riders in 2016 by the time its season ends on Oct 31.

More than her company or herself, Lu is worried for her Adirondack employees. Rail Explorers has 34 employees, all earning well above minimum wage in an area of the state that was hit hard by deindustrialization. “It’s a tragedy for our employees that we have worked with now for two years. One of our guides is about to become a father. One is about to become a grandfather for the thirtieth time… we have a wonderful bedrock of a community here that want and need us to stay.”

And Rail Explorers wants to stay. To do so, they need two things: rails and a lease from the state government allowing them to use them.

Rail Explorers is based in Saranac Lake, New York and works alongside the Adirondack Scenic Railroad, which has been restoring the rail line from Utica to Lake Placid and will also be displaced if the state does not renew the lease and moves forward with plans for a multi-use rail trail.

The Rail Explorers’ current Adirondack operations are fully compatible with restored passenger service on the rail line between Saranac, Clear, and Tupper Lakes. Rail Explorers also donates a portion of their proceeds to help the Adirondack Scenic Railroad preserve and protect the Adirondack State Park and its historic railroad lines.

Whether or not Rail Explorers is able to move forward with their 2017 ADK adventures is still up in the air, but Lu said that the state will have to act soon on renewing the lease or a 2017 season just won’t be realistic.