According to a press release, the investments are intended to both enhance current facilities and create new opportunities to further develop on- and off-season tourism. 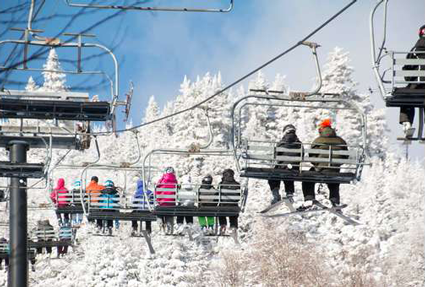 Skiers and snowboarders take the lift at Gore Mountain.
This $20 million investment is the first major upgrade to both Gore and Whiteface in 30 years. The investment is intended to build on current facilities and create an “unparalleled tourism destination for visitors in the North Country.”

“Winter tourism is a key driver of the North Country economy and we have made it a top priority to leverage natural assets in the region to increase visitors, create jobs and spur economic growth,” said Cuomo. “This investment will transform these resorts into year-round, world-class skiing destinations, and attract new skiers and snowboarders from around the globe.”

Many modern ski resorts are shifting focus away from attracting visitors who just want to hit the slopes. Skiing destinations like those in the Alps or Rockies – or even across state lines in Vermont – are offering upscale amenities, conveniences, and year-round attractions. The state’s investment will go toward substantial improvements to the day lodge facilities at Gore and Whiteface to make them globally competitive.

The $20 million investment is also expected to spur growth and investment in the areas surrounding the ski mountains. Improvements will increase revenue and attendance at the facilities, driving economic growth and private investment in local communities.

Love skiing and snowboarding? Discover the best slopes in the Adirondacks >>