If there’s one word to describe the current winter season, it’s “unpredictable.” Temperatures have fluctuated between above freezing one week to single digits the next, and rainy days have been very common. Even worse, this warm weather has created dangerously thin ice on lakes and ponds in the Adirondacks, making snowmobile & ice safety of the utmost importance this time of year. 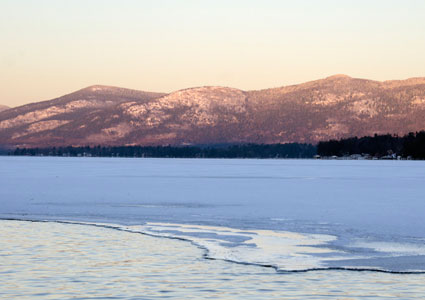 Photo Credit: Luke Dow Photography
This past January, the New York State Office of Parks, Recreation, and Historic Preservation emphasized the importance of snowmobile safety. Knowing the dos and don’ts of snowmobiling will not only keep you safe, but everyone else on the trails as well.

More specifically, all snowmobilers should follow these safety tips:

While you should abide by all these safety tips, the last one is extremely important in light of the recent tragedies and rescues in the Adirondacks. A few days ago, two brothers from Western NY died after their snowmobiles went through a thin layer of ice on Raquette Pond in Tupper Lake, NY.

Unfortunately, that wasn’t the only incident over the past week. A woman was saved from Oseetah Lake after her ATV went through the ice, and three other people on snowmobiles and an ATV broke through the ice on Raquette Pond. Those three were saved by a fourth member of their group.

Snowmobile deaths and ice rescues like these have become too common during warm winter seasons. Although you may think the ice is safe because the temperature is cold, you’ll want to be completely sure.

To help you understand the basics of ice safety, we’ve created an infographic that shows when ice is typically considered safe.

In addition, we also have a video from one of our editors about how to tell if the ice is safe enough to walk on:

Remember, if you don’t need to cross over a frozen body of water, then take an alternative route. When ice is as unpredictable as it has been, it’s best to avoid it than take the risk.