Have the 46 High Peaks become too crowded? That’s a question many environmental advocates have asked in response to the significant rise in the number of hikers recently.

In addition to more hiking incidents, such as winter rescues, increased activity endangers natural resources. As we prepare for another busy summer season where even more hikers are expected to hike the high peaks, some feel it is time to update the region’s management plan. 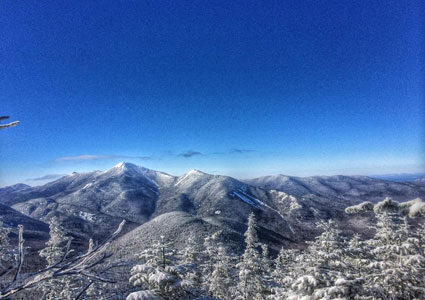 Photo Credit: Jacob Geer
Over the past decade, hiking activity in the High Peaks has grown exponentially. The Adirondack Explorer noted that from 2005 to today, the Van Hoevenberg Trail saw a 62% increase in the number of hikers who registered at the trailhead. When you add in how many people chose not to sign the trailhead, it’s a large number of hikers.

That’s just at one of the popular trailheads in the High Peaks Region. Other high peaks have seen similar rises in activity as well.

More hikers in the High Peaks Region means more people who may not be fully prepared for the challenge. The Daily Gazette noted that over 350 search-and-rescue operations were conducted by forest rangers this past year.

In December 2016, the dangers of winter hiking were raised when the two missing hikers on Algonquin Peak were found. Even though they were experienced hikers, winter can be extremely dangerous on high peaks. All hikers need to be educated about how to stay safe and prepare for hiking in winter.

The second issue that has many calling for a revised management plan is the damage to the trails and wilderness. When hikers are unaware of or don’t abide by the “leave no trace” principles, the natural resources of the High Peaks Region are at risk.

“Leave no trace” is a set of principles that was established to minimize the impact hikers have on trails and prevent conflicts. Some of these principles include disposing of waste properly and being considerate of other hikers. 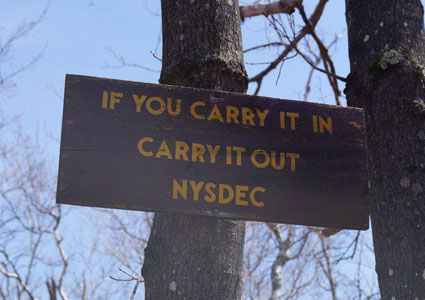 Unfortunately, not everyone follows these principles. In fact, last August, a group of 67 hikers was dropped off at the Adirondack Loj, didn’t sign the trailhead, and exceeded the day-use group-size limit of 15 hikers in the High Peaks. The group limit helps prevent overcrowding on trails and damage to surrounding vegetation.

A DEC ranger ticketed the two trip leaders of this large group. However, these kinds of incidents are reasons why there has been a recent push to update the High Peaks management plan.

In a Daily Gazette article, Peter Bauer, director of Protect the Adirondacks, emphasized a need for greater funding for managing the 46 High Peaks. Since they are a major draw for visitors to the Adirondacks, Bauer believes the state should invest more in trail maintenance, parking, staffing, and public education.

What local environmental advocates are calling for is reestablishing the High Peaks advisory group so the management plan can be revised. Some of the suggested updates include a traffic crackdown, increase in education at major trailheads, and possibly a day-use fee system.

While these are just ideas, many believe something must be done to ensure the protection of the High Peaks Region before it becomes unmanageable.

What do you think is necessary to manage the 46 High Peaks?

Learn about the rules and regulations of the High Peaks Region >>