The proposal to transform the old Frontier Town theme park in North Hudson into the Gateway to the Adirondacks has risen in popularity over the past few weeks. To help the public understand what’s in store for this $32M Upper Hudson Recreation Hub, New York State recently released the complete Master Plan! 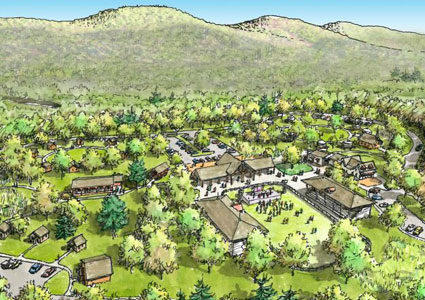 Photo Credit: Office of Gov. Cuomo (Artist Rendering of Upper Hudson Recreation Hub)
Frontier Town in North Hudson was wild-west themed attraction that opened in 1952, and for many years, it helped transform the area into an entertainment hotspot.

Unfortunately, when the park closed down, the region lost its main draw, and many of the surrounding communities began to struggle economically. In order to revitalize the Exit 29 area in the Adirondacks, New York State plans to develop the multi-use Upper Hudson Recreation Hub.

The full details for this visionary recreation hub are available in the Master Plan. It was created by New York State, the Open Space Institute, the Empire State Forest Products Association, Essex County, and the “Five Towns” that will be heavily involved in the project: North Hudson, Newcomb, Indian Lake, Long Lake, and Minerva.

Frontier Town was chosen as the project site for a few reasons. First, the Schroon River runs along the western boundary of the park, which opens up accessibility to the area by water. In addition, the site is close to Route 9 and the Adirondack Northway, making it accessible to the surrounding communities as well.

Some of the planned renovations are a campground and day use area by the Schroon River, a welcome center, and restaurants & lodging near the hub and Route 9.

Despite these changes, New York State will preserve the spirit of Frontier Town, and many of its structures will remain.

The hope is for the Upper Hudson Recreation Hub to offer year-round recreational facilities and attract visitors from all over. Indeed, if the project moves forward, Exit 29 could become a must-visit area of the Adirondacks.

Now that the Master Plan is released, the next steps will include further evaluating the development sites, refining funding programs, and establishing a project timeline.

Are you excited for the Upper Hudson Recreation Hub?

Read more about the initial announcement >>