One of the greatest aspects of the Adirondack Park is its numerous hiking and biking trails, which bring visitors to breathtaking landscapes and scenery. As a way to increase access even more, the Adirondacks will be included in an ambitious three-year, $200 million project to create the nation’s largest multi-use trail here in New York State! 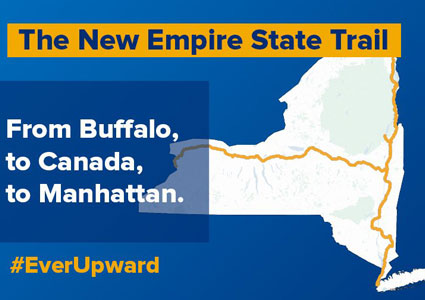 Photo: Office of Gov. Cuomo
What Is The Empire State Trail?

Revealed as part of Gov. Cuomo’s 2017 State of the State agenda, the Empire State Trail is a proposed 750-mile off-road recreational trail that will travel from Manhattan to Canada and Albany to Buffalo.

The goal of this multi-million dollar project is to create an accessible trail that will attract more bicyclists to the state, benefit local communities economically, and highlight the natural scenery and historic sites of New York State.

The Erie Canalway is about 80% complete and runs 360 miles along the historic Erie Canal, from Buffalo to Albany.

The Hudson River Valley Greenway is only about 50% complete, so a lot more work will have to be done. This greenway spans over 260 miles from Manhattan to Lake George, and it closely parallels State Bike Route 9. Bicyclists are currently able to travel on State Bike Route 9 from Lake Champlain to Canada.

Development of the Trail in the Adirondacks

The Empire State Trail project will be developed in three phases over three years, and during that time frame, New York State will construct about 350 miles of additional trails to the Hudson River Valley Greenway and the Erie Canalway.

In the Adirondacks, the trail will travel from Lake George up to Lake Champlain and then Canada. Further details about the Empire State Trail’s exact route have yet to be decided, but it’s expected to connect to a wide range of communities, heritage areas, and historic sites, including Fort Ticonderoga.

The stretch of trail in the Adirondacks, or between Lake George and Canada, will likely be developed during the third phase of the project.

Once complete, the Empire State Trail will travel north to south and east to west in New York State. The trail will be open for year-round recreational use, from bicyclists and hikers in warmer months to cross-country skiers in winter.

To help travelers navigate their way along the Empire State Trail, a new trail website and mobile app will be created in the future. Both will include a list of greenways, trails with descriptions, and difficulty levels.

The website and app will also highlight local attractions, breweries, lodging accommodations, and other family destinations located along the trail.

The proposal in the State of the State agenda estimates that once work begins, the trail will be completed by 2020.

Would you take a trip along the Empire State Trail?