The Village of Saranac Lake is becoming the place to be during the winter season. The Saranac Lake Winter Carnival is recognized as one of the top winter events in the Adirondacks each year, and later this February, the village will host the 2017 WSSF World Snowshoe Championships. 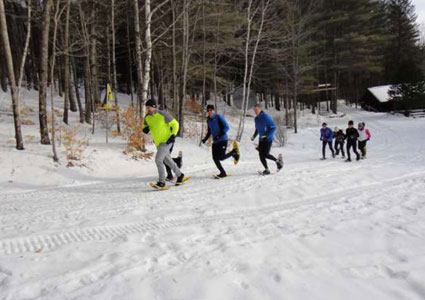 Photo: A Snowshoe Race at Natural Stone Bridge and Caves Park
The World Snowshoe Federation (WSSF) was founded in 2010 by snowshoeing associations in the U.S., Japan, and Switzerland. Although the WSSF hosts snowshoe races around the world, their biggest competition of the season is the World Snowshoe Championships, which have been held in Italy, Canada, and other countries.

According to the Sun Community News, the last time Saranac Lake hosted a world championship event was over a century ago, and that was for barrel jumping.

A year ago, delegates from Saranac Lake submitted the winning bid package to a committee in Italy to host this event. Ever since, the town has been working hard to prepare a challenging 10K snowshoe course. The course will travel from the streets in Saranac Lake to Dewey Mountain.

The 2017 World Snowshoe Championships will take place on February 24 & 25, and there will be more than just races on both days. Some other activities will include a Ski and Snowshoe Jam, vendors at the town hall, and a Winter Heat Salsa Fiesta.

Registration is currently open for all of the races, but even if you’re not a snowshoer, the Championships is expected to be a fun event for visitors and everyone else involved.

Get more details and the schedule for the event >>