For many years, the American elm was common throughout the northern U.S., including the Adirondacks, and southern Canada. Unfortunately, the tree population diminished in the 1970s from the destructive Dutch-elm disease, and since then, it has not recovered. However, one tree found in the Adirondack Park may be key in restoring the American elm population. 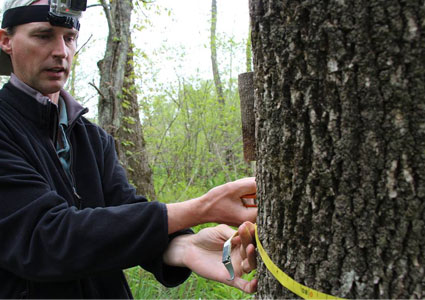 Photo: The Nature Conservancy in Connecticut
Located at the intersection between Route 73 and 9N in the Keene Valley Region, there is an ancient elm tree that stands out among the rest. While a nearby grove of American elms has been damaged by Dutch-elm disease, this one older tree has not suffered the same fate.

Scientists from the Nature Conservancy of Connecticut believe this surviving tree could play an important role in restoring the American elm population. The reason? This tree shows signs of Dutch-elm disease, but it has not succumbed to the effects.

Dutch-elm disease is a highly destructive tree disease that originated in Europe. The disease is a fungus that grows in the water conducting parts of elm branches and stems and then blocks water movement, killing the leaves and the tree.

During the 1930s, it’s believed the disease was brought to the U.S. through affected logs. Elm bark beetles began to spread the fungus and disease to healthy trees, and in the 1970s, it’s estimated over 77 million American elms died as a result.

To restore the American elm population for the future, the Nature Conservancy has been working with the U.S. Forest Service to create a new, genetically diverse population of Dutch-elm disease resistant trees. As part of this massive undertaking, scientists have been collecting branches of older, healthy elms to cross-pollinate.

That’s where the tree in the Keene Valley Region comes in. This is an older, healthy American elm that shows resistance to Dutch-elm disease, making it a strong choice for cross-pollination. Samples from this tree have been sent to laboratories of the U.S. Forest Service Northern Research Station for testing.

In the meantime, the Nature Conservancy and more groups will continue to search for disease-tolerant elm trees. The plan is to plant tens of thousands of new American elms in the Connecticut River region, Champlain Valley, and other areas to restore the once dominant tree population.

Learn about another Adirondack tree – the maple tree >>