Adirondack architect William L. Coulter is renowned for designing Great Camps in the Saranac Lake area. One of his creations, Great Camp Eagle Island, stands out among the rest for being a girls’ summer camp for over five decades. Although the historic camp was forced to close in 2008, a nonprofit group has purchased Eagle Island and plans to revitalize it by 2018. 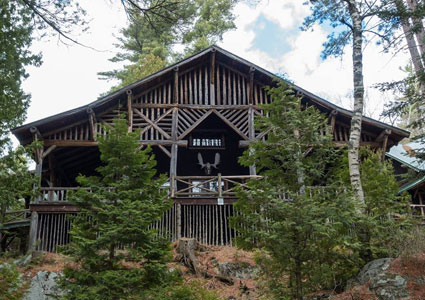 The architecture of the Eagle Island complex is based on the Adirondack Great Camps style, which was created by William West Durant in the late 19th century. Great Camps were made out of logs, bark, and other local materials, giving them a wilderness-aesthetic.

In addition, Great Camps were built on a larger scale compared to other buildings typically found in the Adirondacks. Many became vacation homes for their wealthy owners, and Camp Eagle Island is no exception.

Architect William L. Coulter designed Camp Eagle Island in 1903 for former U.S. Vice President and New York Governor Levi Morton. The complex was built in a small area with views of the lake. 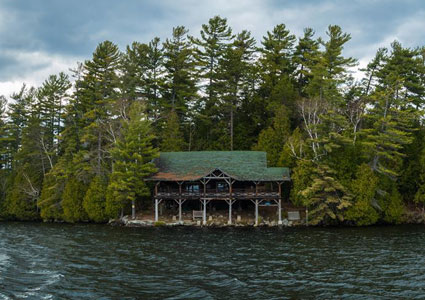 The camp was sold to industrialist Henry Graves, Jr. in 1910, who used it as a summer vacation home for his family. After the tragic deaths of his two sons in 1937, Graves and his wife donated Camp Eagle Island to the New Jersey Girl Scouts of the Oranges and Maplewood. Their wish was to see the spirit of childhood stay alive at Eagle Island.

For over five decades, Camp Eagle Island was operated as a Girl Scout Camp. Much of the camp remained the same over the years, with just a few minor renovations.

In 2006, Girl Scouts USA adjusted the number of active councils, and ownership of Eagle Island passed to Girl Scouts Heart of New Jersey. Unfortunately, due to operational challenges, the council was unable to keep the camp open.

The Future of Camp Eagle Island

Luckily, the story of Camp Eagle Island doesn’t end there. Thanks to an anonymous donation in 2015, nonprofit organization Friends of Eagle Island, Inc. was able to acquire the property.

Since the purchase, Friends has worked hard to revitalize Eagle Island as a youth summer camp once again. Their mission is to open the camp for youth of diverse backgrounds, with a focus on girls and young women. 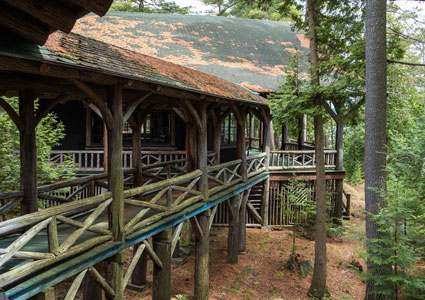 The nonprofit was recently awarded a $498,825 grant to upgrade the camp’s infrastructure and a $10,000 grant for architectural restorations. The Town of Santa Clara also amended their land-use code to allow for group camping, summer camp activities, scheduled tours, and more.

The revival of Camp Eagle Island has become a group effort, and Friends is preparing for a summer 2018 opening. To help keep the spirit of childhood alive at the camp, donations are accepted via their website.

Want to read about another Great Camp?Learn about Adirondack Great Camp Uncas >>