The City of Plattsburgh is a popular access point for Adirondack visitors because of its train station and airport. Although it’s located right outside the Blue Line, Plattsburgh could become even more connected to the Adirondacks, thanks to a proposed 27-mile recreational trail linking the city to Saranac. 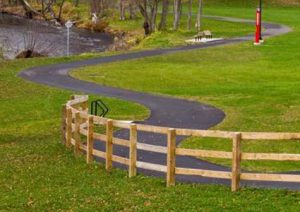 In 2012, the City of Plattsburgh opened the paved recreational trail known as the Saranac River Trail. This 1.3-mile trail travels from George Angell Drive at Plattsburgh High School all the way to the Saranac Street Bridge.

Since its creation, the Saranac River Trail has brought the community together and linked local neighborhoods to the area’s parks and bike paths. In fact, there are plans underway to expand the trail by 1.5 miles toward downtown Plattsburgh. This project is estimated to be completed by fall 2017.

On the other end of the Saranac River Trail (the western end), the latest proposal calls for a 27-mile trail extension all the way to the Town of Saranac. Construction of the trail is dependent upon grant funding, but the City of Plattsburgh and Clinton County have already planned out the first phase of the project.

This 2.5-mile trail will be paved and cost between $1.5-2 million. Clinton County will likely apply for state grants this fall through the Department of Transportation and the Transportation Alternatives Program.

If everything goes smoothly, construction of this Plattsburgh-Saranac trail could begin in 2018.

A recreational trail isn’t the only thing in store for Plattsburgh. Have you read about the city’s airport revitalization?