When you think of a bald eagle, you might first visualize an image of the large bird of prey perched in front of a flag of the United States, proudly representing our ideals of strength and freedom. But thanks to continuing conservation efforts in New York State, your first thought when you hear “bald eagle” may now be of when you spotted one or a pair of the impressive creatures during your trip through the Adirondacks! The numbers of breeding bald eagle pairs has reached an all time high in 2017, so keep your eyes peeled for one of our nation’s symbols soaring through the region. 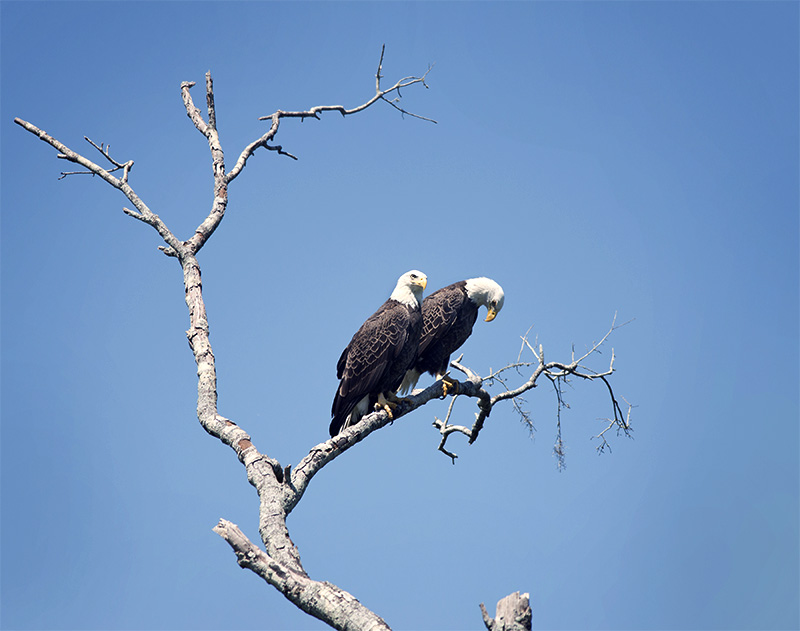 Do you have an eagle eye? If current trends continue, you won’t need superhuman eyesight to observe one of these beautiful birds! A bald eagle spotting in New York State is still a rare and wonderful sight, but luckily for the birds (and us!), New York’s bald eagle numbers are flourishing. According to 2017 aerial surveys conducted by the New York State Department of Environmental Conservation (DEC), this year’s current breeding population consists of 323 pairs of eagles – a new record since restoration efforts began over 40 years ago.

The number of breeding territories suitable for bald eagle nesting has been steadily increasing, with approximately 20 new territories added every year since 2010. This year, more than 70% of the territories are occupied by bald eagle pairs! The presence of more mating pairs validates that the Adirondack area is once again suitable to sustain a substantial bald eagle population.

The DEC encourages public participation in chronicling the conservation success story of bald eagles in New York. If you find a new nesting pair of eagles or can provide updates on the status of a nesting pair, please contact DEC at (518) 402-8957 or by email at fw.information@dec.ny.gov.

In 1782, the bald eagle was chosen as the emblem of the United States because of its strength, long life, and majesty. The birds were found across the country, including in New York State. However, by the late 1960’s the bald eagle was nearly eliminated from New York due to the effects of DDT on the state’s lakes and rivers.

In 1976 the DEC undertook a restoration effort that involved the process of “hacking” the eagle population. Bald eagle nestlings from areas with healthy populations were raised with minimal human contact and then released in New York to compensate for the absence of healthy adult birds in the area. The thirteen year program proved extremely successful and inspired bald eagle hacking efforts in multiple other states and areas of Canada.

Since the program concluded, the bald eagle population has continued to increase to reach this year’s new record, and in 2007 the bald eagle was removed from the federal list of threatened and endangered species. Conservation efforts are still in place at the national level, including the Bald and Golden Eagle Protection Act, the Migratory Bird Treaty Act, and the Lacey Act. New York has also persisted in its conservation endeavors with the 2016 Bald Eagle Conservation Plan that addresses current threats facing the state’s bald eagle population.

Want to learn more about ADK animals? Check out our Wildlife Guide>>