Revolution Rail Co. has brought rail biking to North Creek. Over the coming weeks they’ll be ramping up and expanding trips from select days to 7-days a week. Pedalers will enjoy exploring rails that have been used only for freight traffic – until now. 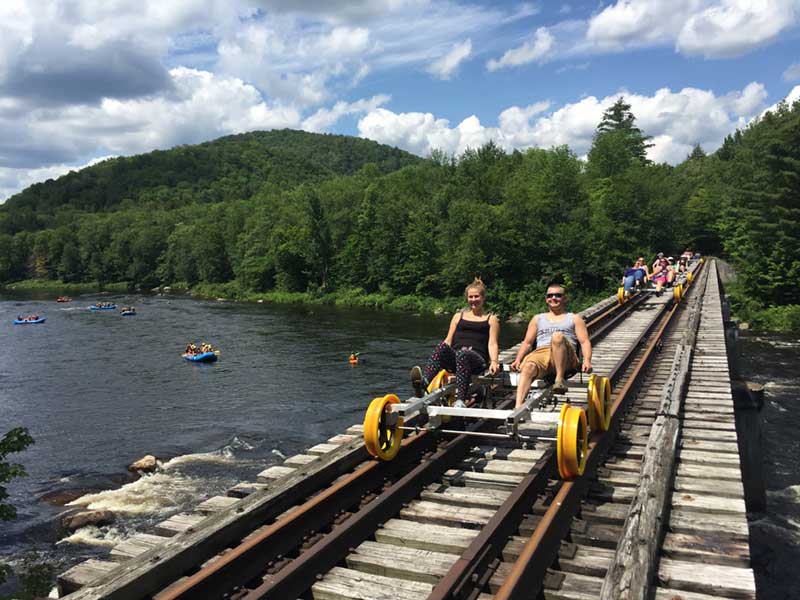 Headquartered at the historic North Creek rail depot, Revolution Rail Co. takes riders on a 6-mile pedaling cruise through the forest and along the Hudson River. Bikers will enjoy a fairly flat ride including a trestle bridge that crosses the Hudson. After heading 3-miles north riders can pause to refuel at the picnic area while the bikes are turned around for the return trip. Trips are booked by the bike and run $70 for a two-person bike, $135 for a 4-person.

Revolution Rail Co. worked out a contract with the Saratoga & North Creek Railway for use of the track. Currently unused by tourist trains, the companies were able to come to an agreement on a 3-mile section of rail north of the depot.

This is the second rail biking endeavor in the Adirondack Park, but will be the only one operational for the 2017 season. An ongoing legal battle over a 34-mile portion of the track between Tupper Lake and Lake Placid is preventing the Saranac Lake-based rail biking company from operating this year.