In recent years, the NY State Department of Environmental Conservation has been working to establish a network of community-connector trails between Long Lake, Minerva, Newcomb, North Hudson, and Indian Lake; this would help make the region even more accessible for snowmobilers. Although the project was stalled due to a lawsuit against them, a state judge has sided in favor of the DEC and their new trails. 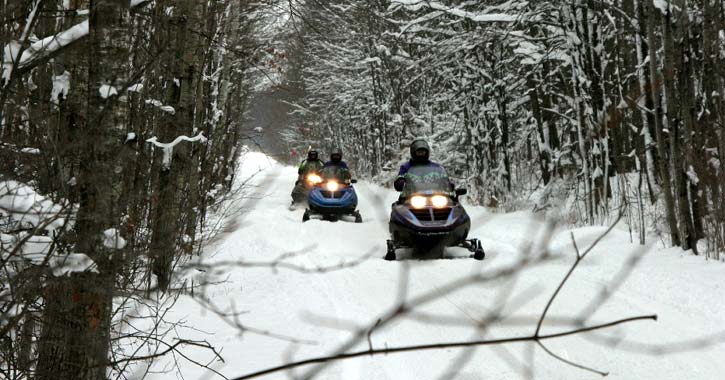 Around 2013, the DEC began work on planning the construction of community-connector trails in the heart of the Adirondacks. These trails, classified as Class II Community-Connector Trails, would be open year-round for recreational use, such as hiking, biking, and snowmobiling. In order to build this network of trails, the department would have to cut down trees and clear multiple paths.

The community-connector trail system would include roughly 32 miles and link Long Lake, Minerva, Newcomb, North Hudson, and Indian Lake. Furthermore, the trails would be about 9-12 feet wide. Work is currently complete on parts of the trail system, but not all.

In response to the project, in 2013, local environmental advocacy organization Protect the Adirondacks issued a lawsuit against the DEC and these connector trails.

Protect the Adirondacks opposes the construction of these community-connector trails for two reasons:

The organization’s lawsuit against the DEC and their project has been a major point of discussion in the Adirondacks. However, after reviewing the arguments provided by both sides, Acting Albany Supreme Court Justice Gerald W. Connolly has announced that Protect the Adirondacks failed to offer sufficient evidence. As a result, the lawsuit has been dismissed.

For Protect the Adirondacks, the organization is considering an appeal of the judge’s decision. They  have until early January to file their notice of appeal, which would give them time to file an official appeal.

For the DEC, the next step will be to have the injunction set by the Appellate Division lifted so they can begin trail construction again. According to the Sun Community News, this process may take 60-90 days, but the DEC is looking forward to continuing work on these trails for the upcoming snowmobile season.

Snowmobile Season in the Adirondacks

A recent notice by the DEC has stated that snow depths range from 2-18 inches in the western and central Adirondacks. This weekend, most gates and designated snowmobile trails in those regions will likely be open for snowmobiling, including the Moose River Plains and the Seventh Lake Mountain trail. If you’re planning on heading out this weekend, be sure to check local trail conditions beforehand!

Find out more about Adirondack snowmobiling >>