Your Guide to the Adirondack Region
Enter Giveaways Advertise
Home  »  Community  »  It’s Almost Carnival Time! Get All the Info You Need for the 2019 Saranac Lake Winter Carnival

The always popular Saranac Lake Winter Carnival is one of the biggest events to happen in the Adirondacks all season. The 2019 carnival is happening February 1st through the 10th and this year’s theme is Prehistoric Park.

Read on to find out everything else you need to know, from sending in vendor applications to attending the Grand Marshall Reception and Royalty Dinner. 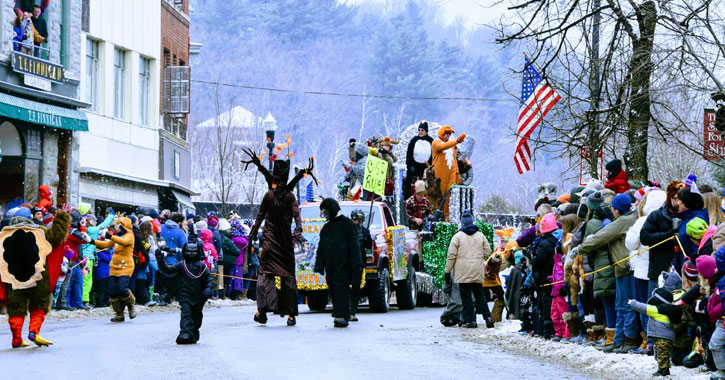 First and foremost, the vendor applications are due this Friday, January 11th, so if you’re looking to participate you’ll want to get that in ASAP.

Applications for vendors participating in the carnival are now available online at saranaclakewintercarnival.com. They can also be picked up at the Saranac Lake Area Chamber of Commerce at 39 Main Street.

All participating vendors must complete the vendor agreement form and submit a deposit check by January 11th.

In addition, any vendor serving food or beverages is responsible for getting an operating permit from the NYS Department of Health at least 30 days before the event. Be ready to display this upon request.

Nominations for the King and Queen must be received no later than 12pm on January 18th. Submissions should be mailed to the Winter Carnival Committee, Attention: King/Queen Nomination, PO Box 829, Saranac Lake, NY 12983.

They can also be dropped off at the Adirondack Daily Enterprise at 54 Broadway, or the Saranac Lake Area Chamber of Commerce at 39 Main Street.

The committee looks for individuals who volunteer in the local community, and who demonstrate a firm commitment to making life more livable, pleasant, and enjoyable for those who live in and visit Saranac Lake. The volunteering can be through an organization, or self-motivated.

Any questions regarding the king and queen nominations can be directed to Cherie Racette at 518.891.3598.

Applications for parade performers are due on February 6th and are available at saranaclakewintercarnival.com.

The Gala Parade will take place on Saturday, February 9th. Trophies will be awarded for floats and walking units in the following categories: Business, Civic or Volunteer Group, Youth Group, School Group, Independent Group, and Animal Unit. There will also be a Louis Fobare Trophy for Best in Parade.

Complete parade applications can be emailed to parade@saranaclakewintercarnival.com, dropped off at the Saranac Lake Area Chamber of Commerce, or mailed to the Winter Carnival Committee at PO Box 829, Saranac Lake, NY 12983, no later than the 6th.

“Doonesbury” cartoonist Garry Trudeau has released his button design for the 2019 carnival, which perfectly coincides with the theme. The illustration depicts Doonesbury character Zonder riding a mammoth while facing a saber-toothed cat.

Buttons will also be sold during the carnival at the headquarters located at the ROOST office at 193 River Street. Buttons from past years are also available for $5.

Trudeau has also designed the poster for the 2019 carnival, which goes along with the button. Signed posters are available for purchase starting on January 15th. There are 100 signed posters being sold at $70 each. Unsigned posters are also for sale at Ampersound and the Saranac Lake Area Chamber of Commerce, and will also be sold during the Winter Carnival, for $15.

Buttons and posters are beloved by the community and are collected by many each year. Consider being a part of this longstanding tradition!

Any questions relating to posters can be directed to Jeff Dickson at casjdcksn@aol.com or 518.891.4344.

Grand Marshall of the Gala Parade

Melinda Little has been selected as Grand Marshall of the Gala Parade for this year. Melinda has been a significant part of the Saranac Lake Community for many years, having moved to the area over two decades ago.

She brings ample entrepreneurial and volunteer experience to the table, and she currently manages Point Positive, an angel investor group.

The 2019 Grand Marshall Reception & Royalty Dinner is happening on Tuesday, February 5th, at 5pm at Hotel Saranac. The reception is free; the dinner is $32 for adults and is by reservation only. All proceeds from the dinner benefit the Saranac Lake Winter Carnival.