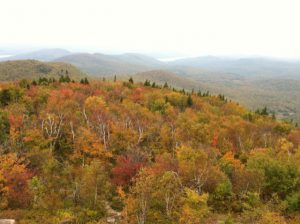 Autumn is my favorite time of year for several reasons. The beautiful weather, some of my favorite holidays and sporting events, apple picking, and most of all, the changes that come across my favorite hangout, the Adirondack wilderness. I love to see the leaves changing this time of year. As the first frost hits and claims whatever is left of your garden, most of the trees in the area begin to transform into various shades of yellow, orange and red. And what a sight it is! 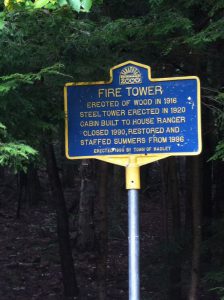 Last week I hiked one of my all-time favorite trails. Growing up in Lake Luzerne, I have been up Hadley Mountain many times since my first trip with my 5th grade class. I have hiked this trail in the spring, summer, fall and even winter! The trail is hardly ever dry, and the grade is moderately steep at parts, but the entire climb is only 2 miles long with a vertical rise of about 1,550 feet.

The trail is no harder to find than it is to climb. Heading North on Stony Creek Road, away from Hadley, you will come to Hadley Hill Road, and see a sign that says Fire Tower on the left. The trail head is on Tower Road, a little more than 3 miles from the base of Hadley Hill, on the right. 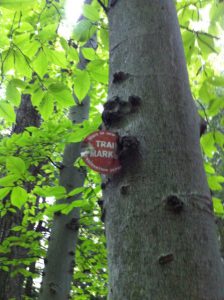 The trail is marked with sporadic red discs, most of which you’ll never see. However, with the amount of traffic this place gets, it is virtually impossible to lose the trail for most of the year.

Hadley Mountain is also special for reasons that do not include my childhood. After massive forest fires burned almost 1 million acres of New York back in the late 19th, and early 20th centuries, the state built several fire towers across the Adirondacks. The towers were manned by observers that often trekked long distances with heavy packs full of supplies for their week-long stay. Many of the trails and fragile telephone lines were actually maintained by these individuals. I think I found evidence of some old phone/power lines that may have run up the mountain to the fire tower and ranger’s cabin years ago. 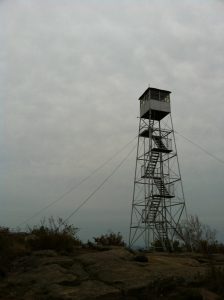 From a combination of glaciers retreating and forest fires burning, the summit of Hadley Mountain is fairly bare. Lots of rocks to sit on, a fire tower, and a large, wide trail make this a popular spot for picnics and field trips.

The highlight of my trip was to see that the leaves seem to be nearing peak colors soon, and pretty early this year! What a sight, climbing the stairs of the fire tower, looking out over the Adirondacks as they come ablaze with bright, beautiful colors for the season. Had it been a sunnier day, rather than the overcast conditions I was stuck with, the colors would have been that much more vibrant.