The Murder at Big Moose Lake

Conflicting versions of this story exist, so the tale of Big Moose Lake should be read as speculation surrounding a legendary story, not indisputable fact.

One of the most shocking and scandalous murders to ever take place in Upstate New York happened right here in the Adirondacks, at Big Moose Lake. The murder of Grace Brown in July of 1906 has influenced a number of plays and songs – even a movie and a novel as well. And, she reportedly still haunts the lake today. 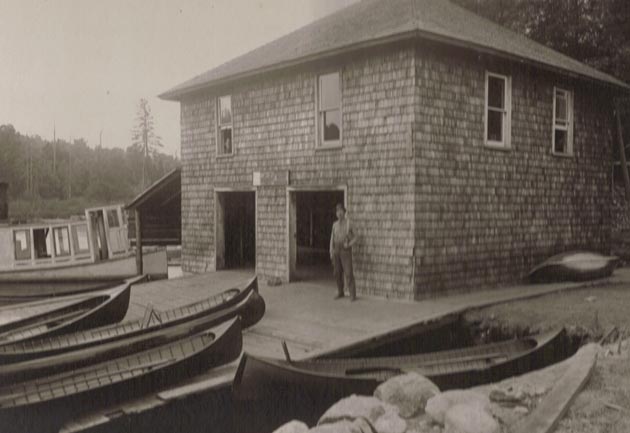 Grace Brown grew up on a dairy farm in South Otselic in Chenango County. Breaking out of the farm life, Brown came to Cortland to work at the Gillette Skirt Factory, where she met Chester Gillette, the nephew of the owner.

Gillette was originally from Montana and bounced around from place to place before his wealthy uncle took him under his wing, and hired him at the skirt factory.

Upon meeting Brown, the two began dating in secret. As a girl from a farm and a factory worker she wasn’t quite up to the standards Gillette’s family wanted for him. Also, he was considered to be a great catch in the town – handsome, and from a good family. He couldn’t let people know he was going with a factory girl.

In May of 1906 Brown revealed to Gillette she was pregnant. She was 20, and he 23. At the time, unwed mothers were outcast from society. Brown went back to her family’s farm where she and Gillette corresponded by letters, in which she basically begged him to marry her.

Gillette finally wrote to her that he would take her away on a romantic outing to the Adirondacks in July. Legend has it that Brown either assumed he was going to propose to her on this trip, or she possibly thought they would actually get married while they were away.

The young couple spent the first night of their trip in Utica, then took the train to Tupper Lake the second night. On July 11th they took a train back towards Utica, stopping at Big Moose Lake along the way in Herkimer County. Gillette and Brown rented a canoe together and spent the afternoon on the lake.

While Brown reportedly left her trunk at the train station, Gillette brought everything he took with him in the boat, including his suitcase which had a tennis racket attached to it. Around early evening, Gillette smashed Brown’s head with the tennis racket and she fell into the water; Brown had previously told Gillette in a letter that she was unable to swim.

Gillette fled the scene and spent the night at the Arrowhead Hotel in Inlet under an alias. Brown’s body surfaced not long afterwards, with the autopsy eventually revealing bruises on her head and a four-month-old fetus inside her.

Gillette was arrested within days of the murder. Newspapers across Upstate New York and beyond covered the event and subsequent trial, while Gillette maintained his innocence. His trial at the courthouse in Herkimer was the most sensational ever held in the area, with hundreds coming to witness. Famous newsmen of the day like Bat Masterson came from New York City.

During the trial, the defense claimed Brown had jumped into the lake committing suicide; they pointed to letters Brown had written to Gillette mentioning that she wanted to die. They asserted that when Gillette stood up to save her the boat capsized. The DA insisted Gillette had hit her over the head with the tennis racket and did nothing to save her when she succumbed to the lake.

On December 5, 1906, after nearly five hours of deliberation, the jury found Gillette guilty of murder in the first degree, and he was sentenced to death by electric chair. He was reportedly calm and even smiling when his sentence was handed down.

Gillette was transferred from the Herkimer County Jail to the Auburn Prison – now Auburn Correctional Facility – where he was executed on March 30, 1908.

As his last day on Earth was nearing closer, Gillette reportedly confessed to the murder to his spiritual advisors at the prison, who never revealed the exact details.

Gillette’s body was moved to nearby Soule Cemetery, where it was buried in an unmarked grave. According to celebrity grave enthusiasts, the plot had a road paved over it, and the exact location of the grave is now unknown.

Many continue to be fascinated by this incredible murder story.

The murder of Grace Brown has influenced the 1925 Adirondack folk song, “The Ballad of Big Moose Lake,” the 1951 movie A Place in the Sun, and was also the premise for many other works: a 1925 novel An American Tragedy, and a 1926 play and 2005 opera of the same name, just to name a few.

Sightings of the ghost of Grace Brown have been continually reported over the years around Big Moose Lake.

The public is able to take advantage of hiking, camping, and boating opportunities at the lake – if you dare.