The Emerald Ash Borer (EAB) is an invasive species from Asia and was first discovered in North America in 2002, when populations were found in Michigan and Ontario. The insects infest and kill North American ash trees, including white, black, and blue ashes. Despite the beetle's small size, it is incredibly destructive to ash trees, of which there are over 900 million in New York State. 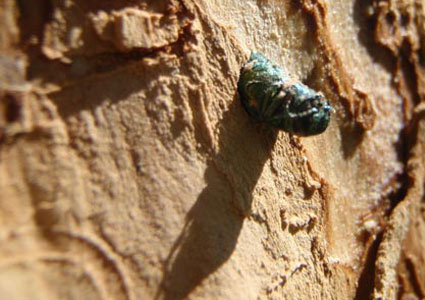 After hatching from an egg and developing through the larva (white, inch-long "worms" with bell-shaped segments) and pupa stage, the emerald ash borer reaches its adult stage, during which it can most easily be identified. An adult EAB has a shiny emerald green body and wing covers with a coppery red or purple abdomen, and measures between 1/8 to a little more than 1/2 an inch long, smaller than the diameter of a penny. These small metallic green insects can be present from late May through early September, but are most likely to be spotted in June and July.

Emerald ash borers can also be recognized by their exit holes left on ash trees. Adult beetles leave a distinctive exit hole shape in the outer bark of the branches and the trunk - a hollowed out "D" shape. EAB larvae also leave "s" shaped feeding tunnels underneath the bark of ash trees.

Most ash trees infested with emerald ash borers die within 2 to 4 years, and since its discovery in 2002, EABs have been responsible for the destruction of hundreds of millions of ash trees in the U.S. Signs of infection include tree canopy dieback, yellowing, and browning of leaves. Once EABs infest ash wood they are often transported and spread over long distances by humans. This has resulted in further Quarantine Regulations on top of New York's Firewood Regulations that limit where and how far firewood can be transported.

A large number of New York's ash tree population is located in the Adirondacks. Much of western New York and part of the Catskill Mountains are already infested or quarantined due to the presence of EAB; these areas constitute the "Restricted Zone" from which ash wood, wood chips, and nursery stock are highly regulated. The destruction of the state's ash trees would disrupt fragile ecosystems, devastate the state's landscape, and cost millions of dollars in tree removal.

The New York State Department of Conservation (DEC) is currently instituting quarantine programs, firewood restrictions, and other protective measures as part of their EAB management response "Slow Ash Mortality (SLAM)" plan. You can help with early detection by looking for possibly infested ash trees at home and in the woods. High-risk areas include locations near log piles and campgrounds. Help protect New YorkÃ¢Â€Â™s ash trees by using local firewood and not transporting firewood to new areas.

If you find an infestation, take pictures if possible, collect any adult EABs or EAB larvae you can find, and report the infestation to the DEC. Contact the DEC at www.dec.ny.gov/animals/72136.html, call DEC's toll-free Firewood and Invasive Insects Hotline at 866-640-0652, email firewood@gw.dec.state.ny.us, or contact your county's Cornell Cooperative Extension office or your NYS Agriculture and Markets agent.