Moose in the Headlights: Motorists Warned About Rising Moose Population 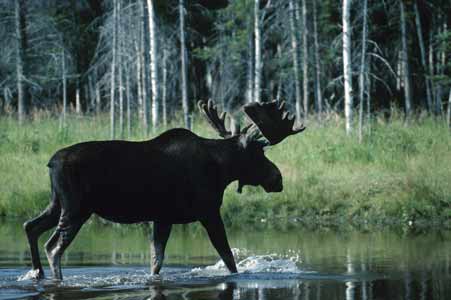 The State Department of Enviromental Conservation (DEC) is reporting that the number of moose in New York State is rapidly rising, up to 800 from 500 three years ago, and as few as 50 in the late 1990's.

The moose have been establishing a base in the area within the last decade, and with that comes increased sightings of the population by hunters. This time of year it's mating season for the moose -- so we're bound to see them more, and more often in areas they aren't usually seen.

This also unfortunately improves the odds that motorists will see them...with their cars. The DEC is warning those in the Adirondacks and surrounding area to be especially cautious when driving during this season. Moose are very large animals and can weigh in at as much as 1200 pounds, so the damage done can be massive.

Moose are most active at dawn and dusk, which are times of poor visibility. Moose are especially difficult to see at night because of their dark brown to black coloring and their height - which puts their head and much of their body above vehicle headlights.

The DEC advises motorists to take the following precautions:

The DEC continues to work with the state Department of Transportation to identify areas where moose are present along roads and have warning signs placed.

Learn more about moose in the Adirondacks »