Did you know the Adirondacks has its own ghost town? Named Tahawus, this former village was actually deserted twice after failed mining operations over the years. Learn about this fascinating piece of the Park, its connection to Teddy Roosevelt, and what you can expect to see there today. 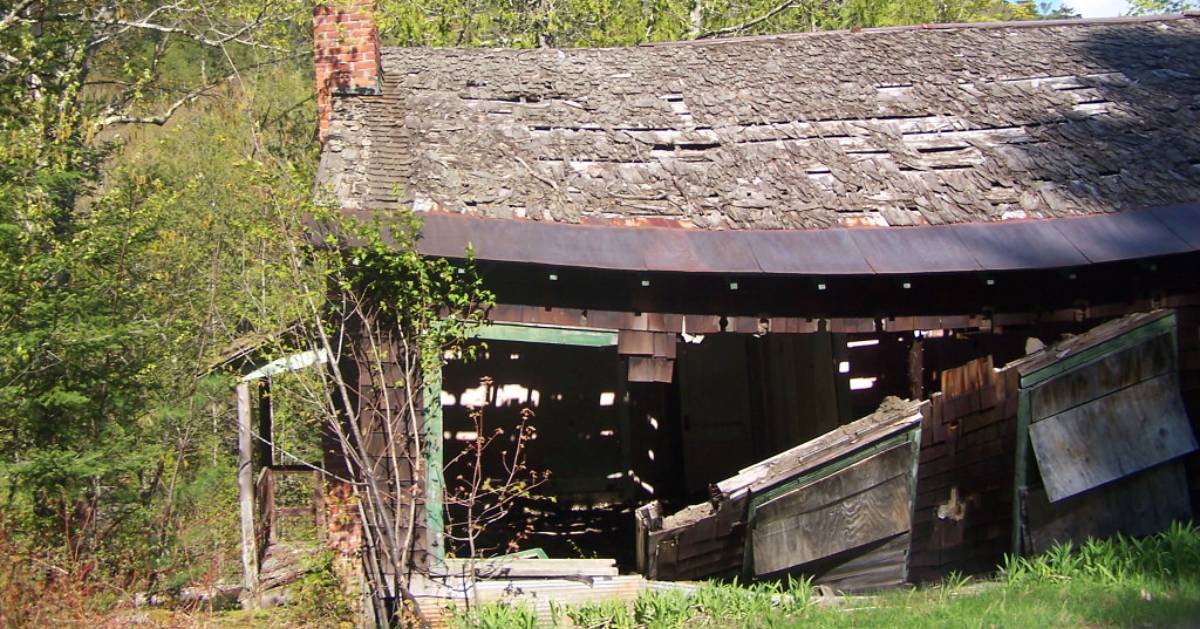 A cottage prior to being torn down; photo credit: Andy Arthur, licensed by CC BY 2.0.

Archibald McIntyre and David Henderson discovered iron ore on the banks of the Upper Hudson in 1826. This prompted the creation of a mining operation that would continue on and off for decades. A nearby village was constructed to support workers and was named McIntyre. McIntyre was renamed Adirondac around 1840.

Throughout its existence, the village included two farms, a blast furnace and forge, a puddling furnace, charcoal and brick kilns, trip hammers, a grist mill, and a saw mill. There were 16 dwellings and a building with a cupola that was used as a school, a church, and a general assembly room. The village even had its own bank, the first organized state bank in the Adirondacks, called McIntyre Bank.

In 1854, Sackets Harbor and the Saratoga Railroad Company began construction of a railroad with the hopes of reaching Adirondac. This undertaking was significant because transportation to a mining operation in the middle of the wilderness was difficult.

A new blast furnace was built in response - also in 1854 - and this was expected to greatly improved efficiency and profitability. But, it became clear the railroad would never reach Adirondac. Transportation and distribution problems continued. During the winter, supplies were shipped on sleds from Albany and up primitive mountain roads to Lake Champlain.

In 1858, the McIntyre Adirondack Iron & Steel Company came to an end, in part because of the transportation issues, but also because of the death of McIntyre, a downturn in the economy, and a flood. This was the first time the town that would come to be known as Tahawus became deserted. 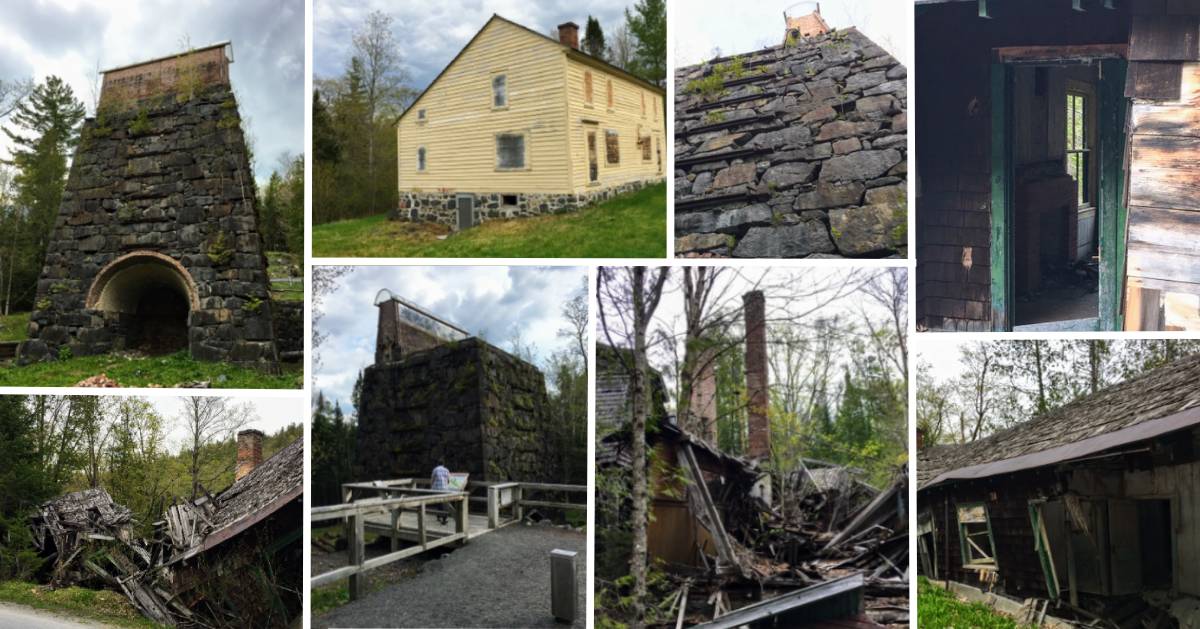 Today you can visit the MacNaughton Cottage (yellow building) and the old Iron Ore Blast Furnace (image 1 and 3 in first row and image 2 in second row); the other buildings have been torn down.

In 1876, the deserted village and surrounding property were leased to a hunting and fishing club, the first of its kind in the Adirondacks, called the Preston Ponds Club.

The Club replaced most of the run-down buildings with cottages, and the village bustled once more. It was renamed Tahawus, and in 1877, the Club was renamed the Adirondack Club and the entire Tahawus Tract was leased to them from the heirs of the original mining operation.

In 1898, the Club changed their name again, this time to the Tahawus Club. The first president was James MacNaughton of Albany, whose father had married the daughter of Archibald McIntyre.

On September 6, 1901, President William McKinley was shot in Buffalo. At the time, Vice President Teddy Roosevelt was at a speaking engagement at the Isle La Motte in the middle of Lake Champlain. He scrambled to get to Buffalo to be with the President; it was undoubtedly no easy feat to travel 400 miles as quickly as possible in the early 1900s.

Meanwhile in Buffalo, the President once again took a turn for the worse. Roosevelt's private secretary William Loeb, who stayed in Albany to keep lines of communication open with the President, tried to get in touch with Roosevelt. Loeb ended up traveling to North Creek by train where he was able to telephone the Tahawus Club; this prompted a search for the Vice President in the wilderness of Mount Marcy.

The search took hours. Shots were eventually fired into the distance to get the attention of Roosevelt and his party. When they made contact at last, Roosevelt was handed the telegram indicating he had to return to Buffalo.

And thus, Roosevelt embarked on his Midnight Ride from the Tahawus Club, making his way by a series of horse-drawn wagon rides through the night, over rough terrain and wilderness. McKinley passed when Roosevelt was somewhere between Tahawus and Minerva, effectively making Roosevelt the 26th President.

Titanium dioxide, an element that once hampered mining efforts in the late 1800s, also served as the reason why the mines reopened in 1941. The wartime demand for domestic titanium dioxide was enough of a reason for a railroad to be built into the mine site, now operated by National Lead Industries.

Even after World War II ended, mining operations expanded, and Club members were evicted to make room for mining employees. In 1962, the mining company relocated its works to Newcomb; some buildings were moved while others were left behind. NL Industries continued operating the mine until 1989, when Tahawus became a ghost town for the second time.

In 1994, the Open Space Institute, a New York City-based organization that works to protect land, started negotiations with NL Industries for the 10,000-acre Tahawus Tract. OSI understood the significant potential the historic land offered, and they were able to secure the purchase in 2004.

Unlike ghost towns out west, a ghost town in the Adirondacks inevitably succumbs to weather elements. Most of the Tahawus buildings were constructed between 1890 and 1930, and before OSI took over, they had collapsed roofs and others signs of deterioration.

Since acquiring the property, OSI has transferred most of the land to the DEC, but they have retained the core 212 acres for educational, historic, and recreational purposes. They have removed the majority of the buildings for safety and contamination reasons except for the MacNaughton Cottage, which has been renovated, and the blast furnace.

Today they have the viewing platform you can see in image 2 of the second row in the collage above, and a short trail that takes you down to the base of the blast furnace. There's also a second viewing platform that looks out over the remnants of additional machinary that was used in the original mining operations, and from there you can walk over to the base of the blast furance.

Check out our video of what Tahawus looked like before the buildings were removed:

Learn about fire towers in the Adirondacks for more historical fun »