In the mid 1800's, New York State law dictated that African-Americans must own at least $250 in real estate or a house in order to obtain the right to vote. Determined to help would-be voters secure this right, abolitionist and real estate baron Gerrit Smith (pictured below) devised a "scheme of justice and benevolence" that he hoped would provide refuge to black families. 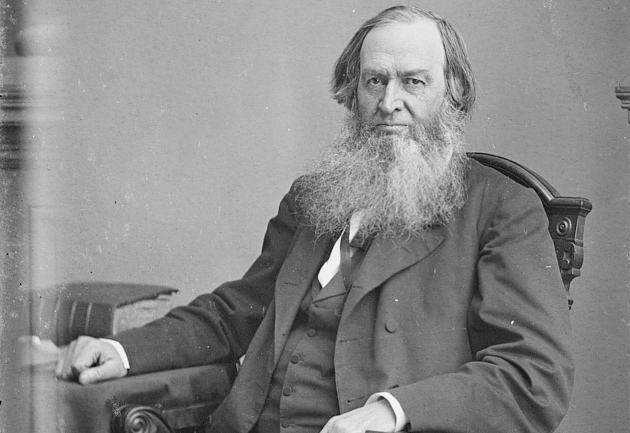 In 1846, Smith divided 120,000 acres of untouched land that he owned in the Adirondacks into 40-acre plots and began granting them to three thousand free African-Americans living in New York State. To secure the right to vote, settlers would have to cultivate the land to improve its value, but Smith believed this was feasible.

The settlement was located in North Elba, and was referred to as "Timbuctoo" (or Timbucto) by abolitionist John Brown. Brown himself purchased land near the settlement and made it his mission to help settlers adjust to a new way of life and learn the skills they would need to survive on the land.

The project drew black families from urban areas where they had previously held jobs as cooks, barbers, and domestic workers. For most, farming untouched land proved to be a massive challenge that they were not prepared for. Cutting down evergreens, clearing rocks, and securing money to pay taxes on the land were just some of the obstacles settlers were faced with.

Although Smith's donation was exalted by Brown, Frederick Douglass, and Willis A. Hodges, among others, many settlers found the situation to be more than they could handle, and moved away shortly after arriving. By 1855, the well-intentioned experiment was over, for the most part.

One family that managed to stay permanently was that of Lyman Epps, who is buried in a small rural cemetery in North Elba. Not only did he build a home in the settlement, but Epps helped found a Sabbath school, a church, and a town library. His family stayed in the area for 100 years until the last member, Lyman Epps Jr., passed in 1942.

Brown's family continued to live on the farm in North Elba even after Brown was hanged for his involvement in the raid on Harper's Ferry in 1859. His body is buried in front of his home on the farm, and several of his deceased supporters were moved and buried alongside him forty years later. John Brown Farm is now a State Historic Site that is open for tours, special events, and recreation.

Today, Timbuctoo is mostly a lost part of Adirondack history. There are no remnants of settlers' cabins, no historic markers, and no signage. Some historians believe the "experiment" was so fleeting that it isn't worth much attention, while others see the settlement as a massive failure. Some, though, see Timbuctoo as an important part of African-American history in New York State that deserves to be remembered.