Interview With Adirondack 46ers About Hiking All 46 High Peaks

With warmer temperatures and good Adirondack New York hiking weather hopefully not too far off, I thought it might be a good idea to provide a little insight on the 46 Adirondack High Peaks – and who better to do that, than those who have the bragging rights on climbing them all!
We are thankful to our “Adirondack 46ers” for sharing with us their insights, wisdom, and opinions on these majestic peaks! Read what our eight contributing Adirondack 46ers had to say about spectacular views, ticky situations, and tackling daunting Mt. Marcy! 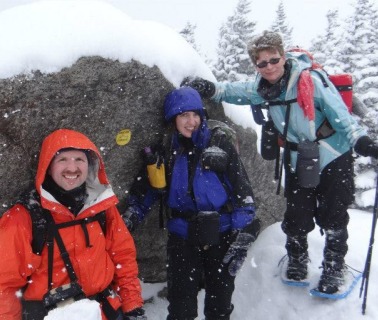 Jeanne Philion-Nichols, 44, Queensbury NY: It took me 1 year and 5 months to complete the 46 peaks. I joined my husband on the hike to his 46th peak, Phelps Mountain. I didn’t really even think about completing them at that point!

Jonathan Lane, 34, Ballston Spa NY: Upon reaching the summits of my first two High Peaks, Cascade and Porter, I was immediately hooked. Completing the 46 High Peaks took me about five and a half years.

Russell Martin, 24, Canton NY: It took three years to finish, though most of my hiking was done in late summer and early fall. I started hiking knowing full well what the 46er organization is. While the views, people, and experiences of becoming a 46er were amazing, I’ll admit I’m a sucker for a patch!

Deb Cantales, 53, Utica NY: I started hiking in the high peaks in 1993 and finished in 2000. On a beautiful August day in 1993, I cIimbed Algonquin and I was hooked on the high peaks! However, I hadn’t thought of becoming a 46er until three years later.

Tom Zebrowski, 55, Saratoga Springs NY: It took me 13 years, as I left the area for a while. Originally, a friend from college asked me to come along for a hike. I then went a few more times and got to really enjoy the challenge and the experience. After reaching 10 mountains I realized I wanted to become a 46er and did! It was a very emotional experience for me.

Tracey B. Laszlo, 51, Syracuse NY: I climbed my first high peak, Tabletop, in October of 2004. Then I didn’t climb again until the Seward Range in 2006. I saved Armstrong and Gothics for last because of the beautiful views. I was all set to finish when hurricane Irene hit and cut off access. As trails opened up again late in the fall I finished (2010).

2. Which peak did you find the most difficult to climb?

Tracey B. Laszlo: Saddleback has the rock face at the top that gave me the most angst. Short span, but it tested my confidence in myself. Rocky Peak Ridge from the New Russia trailhead was taxing in its length and had many accents and descents. 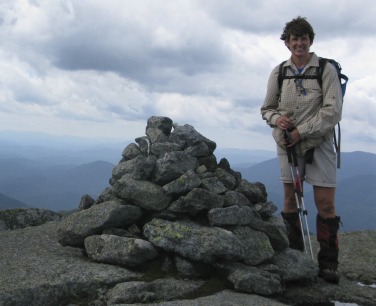 Jeanne Philion-Nichols: For me, Cliff Mountain was difficult to climb. There are several ledges and steep sections to navigate.

Jonathan Lane: Giant and Rocky Peak Ridge. It was one of my first High Peak hikes and the route we took had a lot more ups and downs than my inexperience was prepared for.

Deb Cantales: I would say Allen due to its length and the temperature was 90 degrees and very humid.

3. Which peak has the best “view from the top?”

Tracey B. Laszlo: As all hikers find out, the mountains create their own weather and a view at the top is never a guarantee. With that said, I could only speak to the views I have been afforded. Loved Colden – simply gorgeous. Dial and Nippletop also among my favorites.

Jeanne Philion-Nichols: Without a doubt – Gothics. It’s not as popular as Marcy, but the views are just as good!

Jonathan Lane: Haystack will always be the most memorable for me, not only because it was my #46, but because the day I reached the summit was a beautiful, clear day that allowed me to experience 360 degrees of breath-taking Adirondack beauty!

Russell Martin: Peaks around the edge of the High Peaks (Dix, Sewards, Allen, Whiteface) have amazing views because of their prominence and unique perspective, in my opinion.That said, Giant has an amazing view of both Keene Valley, VT and Champlain.

Deb Cantales: Gothics ranks high as one of my favorites, but several have wonderful views. You’ll have to hike them to find out for yourself!

Tom Zebrowski: Without a Doubt Mount Marcy, but it is much better to during the week when it is less crowded.

next up: Part II Adirondack 46ers Tell All…